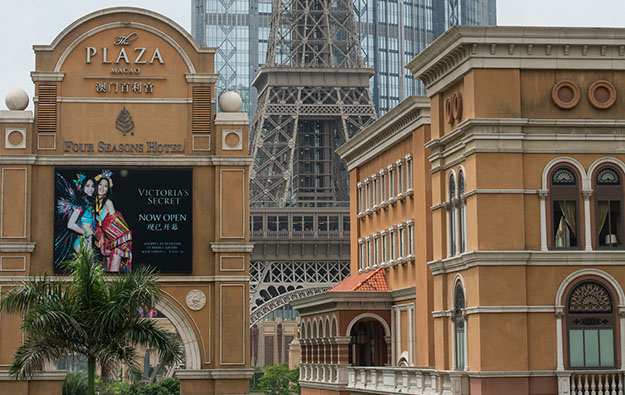 Gaming chips worth approximately HKD3 million (US$382,000) were reported early on Friday to have been stolen from what Macau’s Judiciary Police described as “the gaming venue inside the Four Seasons hotel”, allegedly by two masked men wielding pepper spray.

According to Chinese-language media reports, the Judiciary Police were informed of the incident at about 5.35am by security at the gaming venue, understood to be a reference to the Plaza casino (pictured) at the Four Seasons Macao, a property of Macau casino operator Sands China Ltd.

Sands China confirmed the location of the incident as the Plaza casino, in an email to GGRAsia.

A security staff member stationed at the venue entrance and a table games dealer were said to have been injured by pepper spray as two men snatched gaming chips and then ran away.

At the time this story went online there was no update from the police indicating that any arrests had been made in connection with the incident.

It is the second serious crime to have been reported in that part of Cotai recently. On May 18 – according to local Chinese-language media reports citing the Judiciary Police – four men from mainland China were reportedly stabbed and one fatally wounded, during a fight near the Four Seasons Macao. The incident happened below a footbridge connecting that property to Sands Cotai Central.

At the time, the police said there was no evidence that the incident was “gaming-related”. No further details of that incident had been made public by the police by the time this story went online.

On Wednesday, the Judiciary Police released a statement saying a meeting had been held that day involving its officers, the security department of the Venetian Macao resort hotel, the Sands China property connected to the Four Seasons Macao – and the local casino regulator, the Gaming Inspection and Coordination Bureau. All parties at the meeting were said to have agreed on a mechanism to communicate “speedily and effectively” in the event of any major incident relating to gaming operations.

On Friday afternoon the Judiciary Police issued a brief update on the chip snatch. It said the theft had been in a “high-limit area” of the casino and involved chips with a face value of HKD3.1 million; that the suspects wore masks; and that they left the scene in separate taxis. The update added the Judiciary Police had “reinforced” its patrols in the city’s hotels and casinos.

Sands China said in a Friday statement emailed to GGRAsia: “The incident that occurred at The Plaza casino early this morning is being investigated by the authorities, and Sands China Ltd is fully cooperating with their investigation.”

It added: “The affected team members received prompt medical attention and the company is following up on their well-being, as team members’ safety is of paramount importance to the company. Sands China has no further comment at this time.”