Gaming’s weight in Macau economy to drop: Chui Sai On 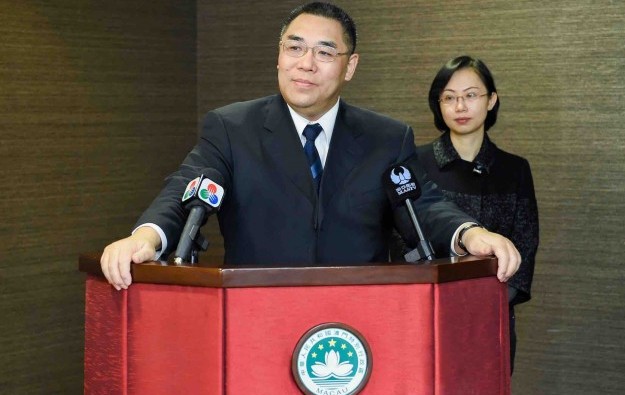 Macau Chief Executive Fernando Chui Sai On (pictured) has said he expects the weight of the casino industry in the city’s economy to be gradually reduced.

He added that pushing economic diversification away from gaming would be one of the priorities for his new term. Mr Chui was sworn into office on December 20 for a second five-year term.

Mr Chui was talking to media in Beijing on Saturday, after his annual duty visit to President Xi Jinping and Premier Li Keqiang to report to on the development of Macau in the past 12 months.

He said President Xi was particularly concerned about the long-term development of Macau, and urged local authorities to push for economic diversification.

During a visit to the city earlier this month, President Xi had already called on Macau to “strengthen and improve regulation and supervision over the gaming industry”.

Macau reported its first year-on-year economic contraction in five years in the third quarter of this year as gross gaming revenue continued to decline. Gross domestic product (GDP) for the three months ended September 30 fell by 2.1 percent year-on-year in real terms, the first negative quarterly growth since 2009, said the city’s Statistics and Census Service. It dropped by 5.7 percent in comparison with the previous quarter.

Gaming accounted for almost 79 percent of the city’s GDP.

Monthly casino revenue in Macau has been dropping since June judged against year prior periods. Macau is already in technical recession, after posting quarter-on-quarter GDP drops since the first quarter of 2014.

He pledged to create new tools to better grasp the importance of non-gaming elements offered by casino operators as part of the renewal process of the gaming concessions. One possible example of such “new tools” of analysis was to request the assistance of local academic institutions, said Mr Leong.

Chief Executive Mr Chui has stated several times that between the years 2015 and 2016 he intends to start examining the renewal of the concessions. Macau’s six casino concessions expire between 2020 and 2022. In August, Mr Chui pledged to carry out a public consultation on the renewal process ahead of making any decision on the matter.

Paradise Co Ltd, an operator of foreigner-only casinos in South Korea, reported casino revenue of nearly KRW48.65 billion (US$39.8 million) for January 2023, according to a Thursday filing to the... END_OF_DOCUMENT_TOKEN_TO_BE_REPLACED