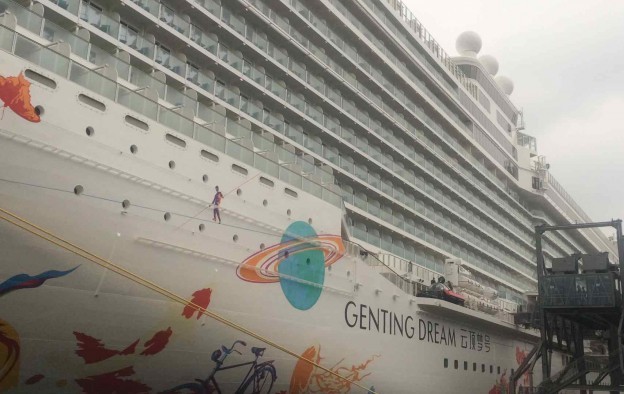 Casino cruise ship operator Genting Hong Kong Ltd says it will hold an online meeting at 5pm on Monday (August 24) for creditors of the group, amid reports the firm’s chairman Lim Kok Thay has pledged nearly his entire stake in the firm as collateral for loans.

On August 19, Genting Hong Kong had told the Hong Kong Stock Exchange it would “temporarily suspend all payments to the group’s financial creditors,” including interest and charter payments, while it sought additional funding amid the suspension of its cruise ship business due to the Covid-19 pandemic.

That filing said that – as of July 31 – the outstanding debt of Genting Hong Kong stood at US$3.37 billion.

On Friday, Bloomberg News reported that Mr Lim, the current patriarch of the Malaysia-based Genting conglomerate, had made the personal pledge to support Genting Hong Kong’s loans. The stock of Genting Hong Kong had fallen by 38 percent on Thursday, the day the firm said it was suspending payments.

A Monday filing to the Hong Kong bourse – announcing the creditors’ meeting – said the firm had already settled EUR3.7 million (US$4.4 million) in “bank fees” that – as of the August 19 filing – had not been paid.

The sum related to financing to build some cruise ships. Prior to the pandemic, the group had committed itself to a programme of building new cruise ships at European shipyards.

Monday’s filing from Genting Hong Kong nonetheless stated that, where considered “in the best interest of all stakeholders,” the board would “consider paying interest and charter payments as they fall due based on pre-existing terms”.

At Monday’s creditor meeting, Genting Hong Kong would “present and discuss an orderly process for reaching agreement with respect to a solvent, consensual and interconditional restructuring solution for the group,” said the Monday filing.

Banking group Nomura said in a Friday note that although Genting Hong Kong was part of a larger group, including Singapore casino firm Genting Singapore Ltd; Malaysia and United States operator Genting Malaysia Bhd; as well as Malaysia’s Genting Bhd; “this time the likelihood of a related-party bailout is low because all subsidiaries… are themselves on a cash conservation mode due to their own respective capital expenditure commitments, amid Covid-19”.

Analysts Tushar Mohata and Alpa Aggarwal added: “Each [Genting] entity’s regulator closely monitors the corporate structure of the firm that has the casino licence, which means material transactions such as these might need to pass the regulator’s scrutiny.”

Additionally, “minority shareholders’ votes might be needed if any financial rescue crosses a certain threshold, and this could be a difficult hurdle,” said the Nomura team.

Genting Hong Kong said it would “continue to preserve as much liquidity” for the group “as possible” and “fulfil the board’s fiduciary duties and… treat all its financial creditors fairly and equitably”.

Bloomberg’s Friday report said – citing the Bloomberg Billionaires Index – that the Genting group’s boss Mr Lim had seen his personal fortune fall by more than half, to about US$700 million, from US$1.5 billion at the beginning of the year.

Mr Lim had already pledged most of his 76-percent stake in Genting Hong Kong to support that company, said Bloomberg.

Genting Hong Kong said earlier this month, it expected to record an unaudited consolidated net loss of “not less than US$600 million” for the six months ended June 30. The company said the lacklustre result was because of suspension of most its operations within the latest reporting period due to Covid-19.

In March the firm had announced that its top executives had “waived 100 percent of fees and compensation” from February until year-end, and that it would be cutting jobs amid the pandemic-related disruption to its business.

On July 26, outside the first-half reporting period, the group said its Dream Cruises brand was ready to restart its cruise services for the Taiwan market.

Gaming revenue at Paradise Co Ltd, an operator in South Korea of foreigner-only casinos, rose by 312.9 percent year-on-year, to KRW39.17 billion (US$27.6 million). But such revenue was down 22.4... END_OF_DOCUMENT_TOKEN_TO_BE_REPLACED