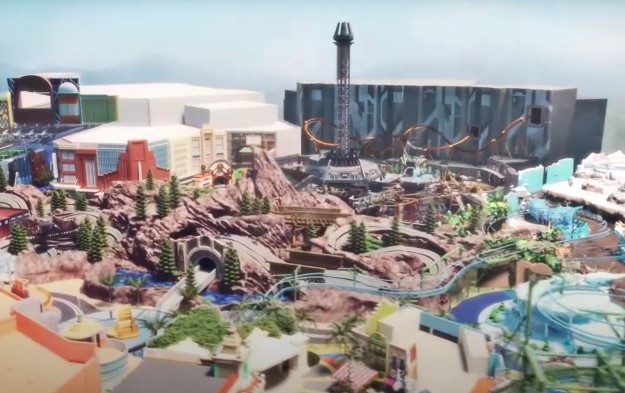 Casino operator and resort promoter Genting Malaysia Bhd has confirmed it is targeting the second quarter this year for the launch of the long-awaited outdoor theme park at Resorts World Genting, Malaysia’s only casino complex.

The facility (pictured in a mock-up) will be branded “Genting SkyWorlds”, according to Malaysia media reports citing commentary from the firm’s management during an online briefing on Tuesday.

Resorts World Genting, located in an upland area outside Malaysia’s capital, only reopened on February 16, after being closed for more than three weeks as a Covid-19 countermeasure.

Genting Malaysia invested “over US$800 million” in Genting SkyWorlds, which was undergoing some “finishing touches” for the eventual launch, reported respectively Reuters and financial news outlet The Edge Markets, citing management.

The outdoor theme park is to feature in its rides and imagery, themes linked to the 20th Century Fox movie brand.

The attraction had been conceived as having  “20th Century Fox” branding across the whole theme park. That idea was eventually dropped. In July 2019 Genting Malaysia said in a filing to Bursa Malaysia it had reached a settlement “fully resolving” what had previously been reported as a circa US$1-billion lawsuit in the United States on the matter.

The theme park spans 26 acres (10.52 hectares) and is said to be able to accommodate up to 20,000 tourists at one time in normal trading conditions. In the absence of inbound foreign tourism to Malaysia – possibly for the next six months to one year – the facility will for now be marketed to Malaysian families, reported The Edge Markets, citing Resorts World Genting executive vice president of leisure and hospitality, Edward Arthur Holloway.

Macau mass-market casino gross gaming revenue (GGR) for the recent Chinese New Year (CNY) holidays could have recovered to at least 60 percent of that for the 2019 break, when the festivities were in... END_OF_DOCUMENT_TOKEN_TO_BE_REPLACED