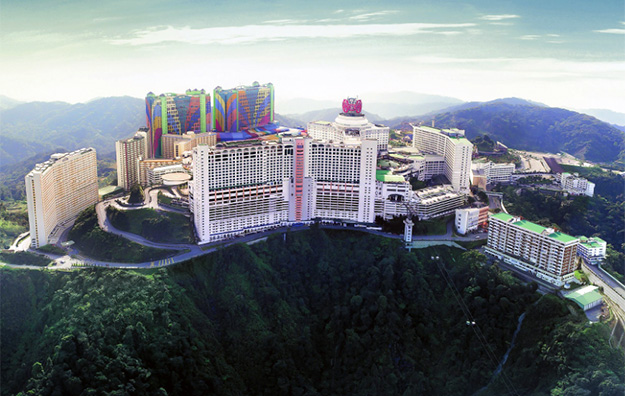 In October analysts from brokerage CIMB Securities Ltd said the park’s opening had been delayed “until 2017”.

Analysts from Nomura said in a Wednesday report that it had been a “negative surprise” for investors that the budget for a site-wide revamp of Genting Malaysia’s Malaysian casino complex – known as Resorts World Genting (pictured in a file photo), and of which the theme park will be a part – would be more than double the original MYR5-billion (US$1.2-billion) estimate.

“This was also exacerbated by a relative lack of granular detail of this increase,” said Nomura analysts Tushar Mohata and Alpa Aggarwal.

The brokerage said that it estimated factors leading to the sharply increased budget for the Genting Integrated Tourism Plan – as the general revamp is known – included: “a 20 percent depreciation in the ringgit [Malaysia's currency] versus the U.S. dollar since 2013; an increase in the scope of some of the works; no pre-existing design and intellectual property precedent for the… theme park attractions which are being built from scratch; and preliminary designs being refined further”.

The Nomura team said their assessment of the reasons was based on the institution’s discussions with management.

“We believe that the increase in capital expenditure is not necessarily a negative from a strategic perspective: Genting is likely to continue to generate strong operating cash flow [annually] from the Malaysia operation, of MYR2 billion,” said the analysts. They added it made sense to refresh the flagship product, which they said should offer a better return on investment than Genting Malaysia’s U.S. and Bahamas casino ventures.

Nomura added that the expected capital cost for the Malaysian theme park alone was around a quarter of the total revamp budget, or MYR2 billion to MYR2.5 billion, although it said that was “not an extraordinary amount” by the standards of modern theme parks.

It noted that Universal Studios Singapore – a theme park at Resorts World Sentosa, a Singapore casino venue operated by Genting Malaysia’s sister company Genting Singapore Plc – had cost SGD1.4 billion (US$1.0 billion); while 20th Century Fox World Dubai, due to open in 2018, was “reportedly going to cost US$850 million”.

“We think that given Malaysia’s young demographic, and restriction on gaming for a majority of the population, a theme park business means there is something for everyone,” stated the Nomura team. More than 60 percent of the country’s population is Muslim, a religion that forbids gambling.

Lui Che Woo, chairman of Macau casino operator Galaxy Entertainment Group Ltd, was quoted – in an interview carried on Tuesday by Bloomberg – as saying that the firm planned a “special and high-tech” theme park – likely to be the first in Macau – as part of Phase 3 and Phase 4 of its Galaxy Macau casino resort on Cotai.

Nomura’s report on Genting Malaysia also noted some corporate reshuffling in the U.S. by the firm, including of several subsidiaries. Nomura said one of the corporate moves – related to an entity called Genting Massachusetts LLC – could hint at “a likelihood of a financing/operations deal” between Genting Malaysia and the Mashpee Wampanoag. The latter is a Native American tribe from that state that was officially recognised by the U.S. federal government in 2007, and which theoretically has the opportunity to start a casino under the U.S. regulations concerning tribal gaming.

“We believe Genting Malaysia’s track record shows that it is always on the lookout for potential growth opportunities in new casino ventures in the U.S.,” said the Nomura team.

The brokerage also noted that a planned disposal – announced in May 2015 – of Genting Malaysia’s 16.9 percent equity stake in another sister firm, Genting Hong Kong Ltd, was likely to be delayed. Nomura said the main reason was that the Genting Hong Kong’s share price was currently lower than the minimum disposal price per share that Genting Malaysia had said it would be willing to accept.

Macau casino operator MGM China Holdings Ltd had a “record” market share in January, and its venues were the “highest-earning businesses” in the portfolio of the majority owner MGM Resorts... END_OF_DOCUMENT_TOKEN_TO_BE_REPLACED