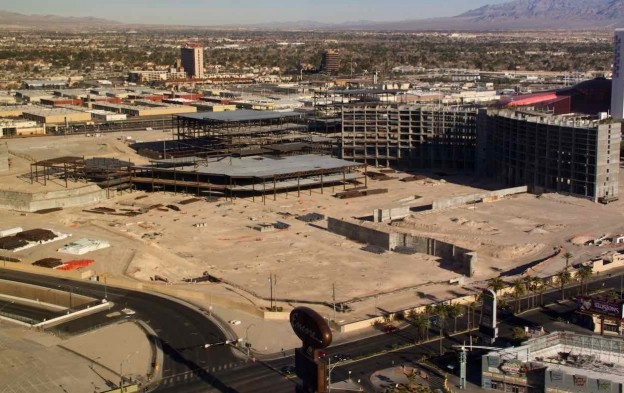 Malaysian conglomerate Genting Bhd has completed a number of corporate moves “for the potential financing of the proposed development of the integrated resort in Las Vegas,” it said in a filing to Bursa Malaysia on Thursday.

It has set up 28 subsidiaries under a Delaware-registered entity called Genting Assets Inc, an indirect wholly owned subsidiary of the company.

Analyst Samuel Yin Shao Yang of Maybank IB Research in Malaysia said that the move for the project – referred to in Genting press statements as Resorts World Las Vegas, and likely to be Chinese-themed – had been expected.

“They said during the third quarter 2015 conference call that they are going to start work in mid-2016 with a soft opening in 2018. Selling the land is not an option,” Mr Yin told GGRAsia in an email.

The gaming resort, on the site of the abandoned Echelon scheme (pictured) at the northern end of the Las Vegas Strip, had its ground breaking ceremony in May.

Vegasinc.com, an online outlet linked to the Las Vegas Sun newspaper, reported in November that the main outward sign of activity on the 87-acre (35.2-hectare) site was a multi-storey car park that has been topped off.

According to the media outlet, Genting claims to have spent US$50 million on construction and other work since the ground breaking. The company is also said to be working to secure local permits – including ones related to energy, sewer and water systems.

“Resorts World Las Vegas is one of the most cutting-edge and ambitious projects to be undertaken in the Las Vegas Strip in the last decade,” Genting spokesman Michael Levoff said in a statement to the news outlet at the time. “A US$4 billion project will not be built overnight; it requires a rigorous planning and approval process.”

Maybank’s Mr Yin told GGRAsia in his email: “Talk is that the actual capex [capital expenditure] budget is unlikely to be US$4 billion but at the lower end of US$1 billion to US$2 billion and apartments will be built to maximise returns and lower net capex.”

In August the Associated Press reported that a former senior aide of Nevada’s Governor Brian Sandoval had been hired to work for Resorts World Las Vegas.

Macau’s Legislative Assembly (pictured) will conduct on Monday (January 24), during a plenary session, a formal first reading of the draft bill to amend the city’s gaming law, according to a... END_OF_DOCUMENT_TOKEN_TO_BE_REPLACED