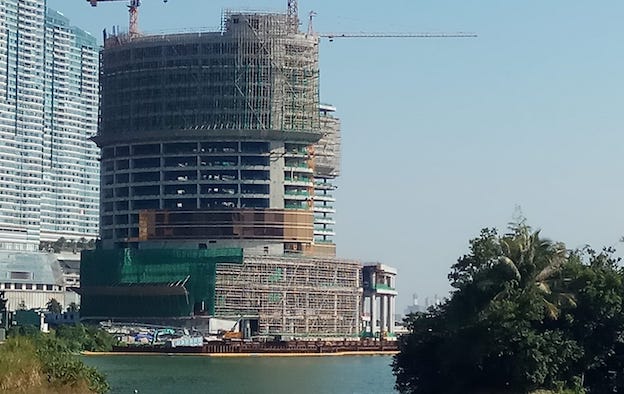 Genting Hong Kong Ltd says it has agreed to sell a 50-percent stake in a subsidiary – Genting Macau Holdings Ltd – involved in the development of a hotel project in Macau. The total consideration for the deal is HKD750 million (US$96.7 million), according to a Wednesday filing.

Genting Macau, via a unit called Treasure Island Entertainment Complex Ltd, is developing the new hotel project (pictured) on a waterfront piece of  reclaimed land in the Nam Van area of the Macau peninsula. The group controls a 75-percent stake in Treasure Island, according to Genting Hong Kong’s latest annual report.

The hotel project, dubbed Resorts World @ Macau according to a billboard on the site, had its topping-off ceremony earlier this year. But construction at the site has since been halted, according to observations of the site by GGRAsia.

The vendor is Star Cruises Asia Holding Ltd, a direct wholly-owned subsidiary of Genting Hong Kong. The purchaser was identified in Wednesday’s filing as White Supreme Corp, a company incorporated in the Republic of the Marshall Islands with limited liability.

Macau-based investor Ao Mio Leong was identified as a principal shareholder and the current director of White Supreme, whose activities are said to be related to real estate, leisure, and hospitality investments. Ms Ao is also the guarantor of the deal, according to the filing.

Genting Hong Kong reported in August a net loss of nearly US$742.6 million for the first half of 2020, with about US$687.1 million attributable to the group’s shareholders. The casino cruise ship operator held on August 24 a meeting for creditors of the group, after it had announced that it would “temporarily suspend all payments to the group’s financial creditors,” while it sought additional funding amid the suspension of its cruise ship business due to Covid-19.

In Wednesday’s filing, Genting Hong Kong said the deal was “aligned with the group’s objective to sell non-core assets” and that it would “reduce the group’s financial burden in meeting future funding requirements in relation to Genting Macau’s business.”

It added: “The transaction will increase the liquidity of the group, with the proceeds being used for general working capital for the Group, thereby enabling layup of the cruise ships in its fleet which are not in operation as well as the ongoing operation of those cruise ships that continue to sail, in addition to funding the group’s cruise-related and other operations.”

According to Genting Hong Kong’s 2019 annual report, Treasure Island is engaged in developing “hospitality facilities in Macau”. The Hong Kong-listed company identified the Macau project as a “hotel/casino” scheme, saying that the gaming component of the project was “subject to the approval from the Macau government.”

The project sits on a land plot with an area of approximately 8,100 square metres (87,182 sq feet), according to the annual report.

South Korea on Thursday said it would from June 1 resume issuing short-term tourism visas for trips to the country’s mainland, for individual visitors and groups of tourists. Permits for... END_OF_DOCUMENT_TOKEN_TO_BE_REPLACED