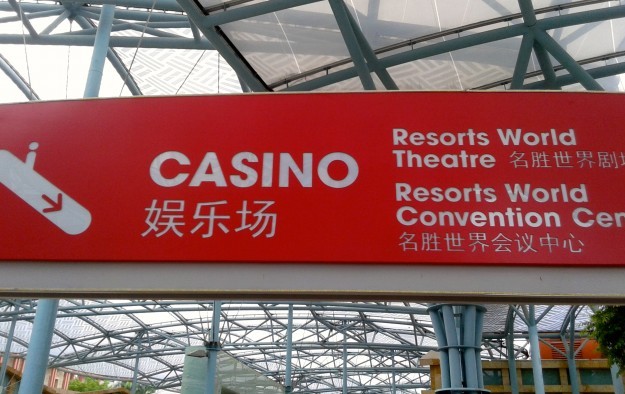 Net profit attributable to shareholders of the company fell 73 percent year-on-year in the first quarter at Genting Singapore Plc, the developer and operator of Singapore casino resort Resorts World Sentosa.

The firm said in a filing to the Singapore Stock Exchange on Thursday that such profit was approximately SGD62.66 million (US$47.44 million) for the three months to March 31, compared to SGD228.49 million in the prior-year period. Earnings before interest, taxation, depreciation and amortisation (EBITDA) fell 46 percent year-on-year to SGD224.09 million, from SGD415.51 million.

No dividend was declared for the quarter, nor was there one for the year-prior period.

“Our premium gaming business continues to come under stress due to regional environmental factors,” said the company in its earnings statement. It didn’t mention mainland China or that country’s current corruption crackdown.

Genting Singapore added: “We do not expect any respite in the medium term, and are restructuring our operational and marketing organisation to adjust to this change. Additionally, in such circumstance, we have adopted a cautious approach in granting credit in this market segment and will be prudent in providing for our receivables. The year ahead will be challenging.”

The firm’s impairment loss on trade receivables rose 30 percent year-on-year for the period, to approximately SGD76.28 million, from SGD58.72 million in the first quarter of 2014.

“Chinese VIP weakness in Macau continues to be felt in Singapore as well, with industry VIP volume on a declining trend over the past few quarters, and currently at its record low of SGD26.2 billion (per our estimates),” wrote Tushar Mohata and Alpa Aggarwal, analysts at Japanese brokerage Nomura in a note on Thursday following the results.

They added: “Management’s guidance seems to point towards a continued weakness in 2015 as well, and it intends to be more conservative in granting credit (reflected in the market share loss to Marina Bay Sands seen in the first quarter of 2015),” the Nomura team added, referring to Resorts World Sentosa’s rival Singapore casino resort developed and operated by Las Vegas Sands Corp.

Maybank Kim Eng Research had flagged in a note on April 24 that Genting Singapore’s management had been guiding investors that it was being more cautious with credit.

Lim Tee Yang, an analyst at Affin Hwang Investment Bank Bhd, a unit of Daiwa Securities Co Ltd, said in a note the same day: “Genting Singapore’s first quarter 2015 results were below our and consensus expectations, as core net profit of SGD66.6 million (-68.8 percent year-on-year) accounted for only 13 percent and 11 percent of full-year estimates, respectively. We believe the variance was due to a slowdown in non-gaming business, weaker-than-expected VIP volumes and higher-than-expected bad debt.”

Most of Macau’s casino operators are likely to generate positive free cash flow in the first quarter, given the robust recovery level of mass-market gross gaming revenue (GGR) in January, relative... END_OF_DOCUMENT_TOKEN_TO_BE_REPLACED