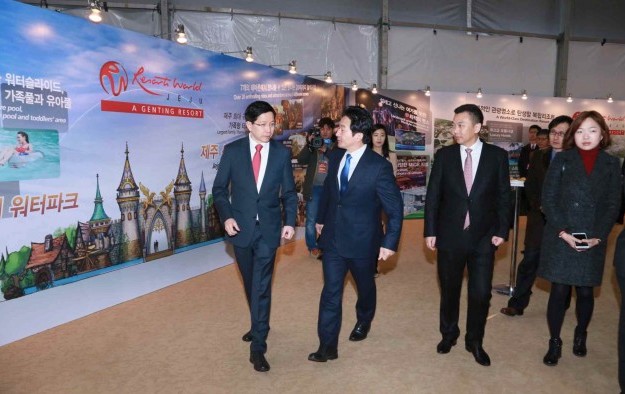 Genting Singapore Plc broke ground on Thursday on its Jeju project, in South Korea, the company said in a press release. Resorts World Jeju (RWJ) will open progressively from 2017 and is expected to be completed by 2019, the firm added.

Genting Singapore, a subsidiary of Malaysian conglomerate Genting Bhd, has a partnership with mainland China real estate developer Landing International Development Ltd to build the US$1.8 billion casino resort on Jeju Island. The property, to be developed by Landing Jeju Development Co Ltd (LJDC), will be modelled after Resorts World Sentosa in Singapore.

In the press statement, the governor of Jeju Island, Won Hee-ryong, was quoted saying that the parties “were able to come to an agreement and form a win-win partnership”.

Media reports last year said the project was facing resistance from the governor for allegedly having exceeded the agreed planning permission.

On Thursday, Mr Won officiated at the groundbreaking ceremony. He was quoted saying: “Jeju is one of the most popular tourist destinations in the region which attracts more than 10 million visitors annually. We welcome LJDC to our island and we are confident that this iconic resort will further strengthen Jeju Island’s reputation as a holiday paradise.”

The firm said its investment would create thousands of jobs on the island.

“RWJ will be a game changer in Jeju that we believe can help the province attain its goal of surpassing 15 million tourists by 2018,” said Lim Kok Thay, Genting Singapore’s executive chairman.

“RWJ will contribute significantly to the local economy by providing employment opportunities to all segments of the labour force, creating approximately 6,500 direct and 25,000 indirect job opportunities in a variety of positions. At least 80 percent of the workforce will be locals,” he added.

The scheme will have more than 2,000 rooms and gaming amenities, the company said. It will also house “Jeju’s largest family theme park, largest adventure water park and one of Korea’s most exciting themed retail and food complexes,” stated the press announcement.

Another subsidiary of the Genting Group – Genting Hong Kong Ltd – is a 50-percent owner of the casino at Hyatt Regency Jeju Hotel. The revamped property opened on January 18.

Macau’s casino gross gaming revenue (GGR) for the first five days of February is estimated at MOP1.9 billion (US$235.1 million) – or MOP380 million per day – a level that suggests a “45... END_OF_DOCUMENT_TOKEN_TO_BE_REPLACED