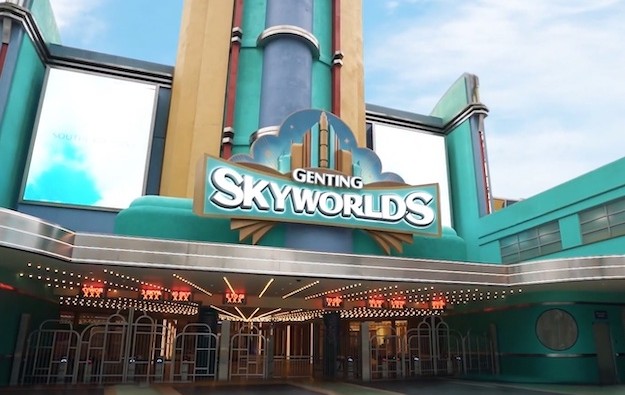 The long-awaited new outdoor theme park at Resorts World Genting, Malaysia’s only casino resort, is impressive, but likely to be “loss-generating due to heavy depreciation”, says a Thursday note from Maybank Investment Bank Bhd.

But it should lead to a net gain in earnings before interest, taxation, depreciation and amortisation (EBITDA) for the entire complex, by bringing in more visitors than might otherwise have attended, said Samuel Yin Shao Yang, one of the bank’s analysts.

He gave the commentary after a “sneak preview” of the park, branded Genting SkyWorlds, at the gaming complex run by Genting Malaysia Bhd.

The launch date of the facility has been put back many times. It is currently likely between “mid- and late-February,” said the bank’s memo.

Maybank put the estimated cost of the theme park at MYR3.3 billion (US$787 million at current exchange rates).

That would put the theme park in second place among such facilities in ASEAN – a club of Southeast Asia nations – for annual visitor volume.

The projected spend per patron was however, likely to be “20 percent lower” than Universal Studios Singapore’s circa SGD80 (MYR250, US$59) average spend per patron, said the analyst. The latter venue is at Singapore’s Resorts World Sentosa casino complex, run by Genting Singapore Ltd.

Nonetheless, Maybank expects the theme park to be accretive to the resort’s overall EBITDA, by attracting more visitors to Resorts World Genting that might otherwise be expected.

He said Genting Malaysia expected the theme park to push the resort’s annual visitor volume to 30 million “in the long term”, although the bank was more conservative, estimating resort visitor volume of 26 million to 27 million per year, compared to a pre-Covid-19 high of 24 million.

Mr Yin noted that for the preview, 13 attractions out of 19 listed on the park’s website were available. The memo added that 26 attractions are due eventually to be offered in the 26-acre (10.5-hectare) theme park.

The analyst said Genting SkyWorlds is designed to cater for 20,000 visitors daily, but would open at 50 percent capacity. “Most of the signs… are also in simplified Chinese, to cater to mainland Chinese tourists in the long run,” he stated.

Macau casino services firm Macau Legend Development Ltd says that a review conducted by an independent consultant “did not note any irregularity” in the dealings between the company and... END_OF_DOCUMENT_TOKEN_TO_BE_REPLACED