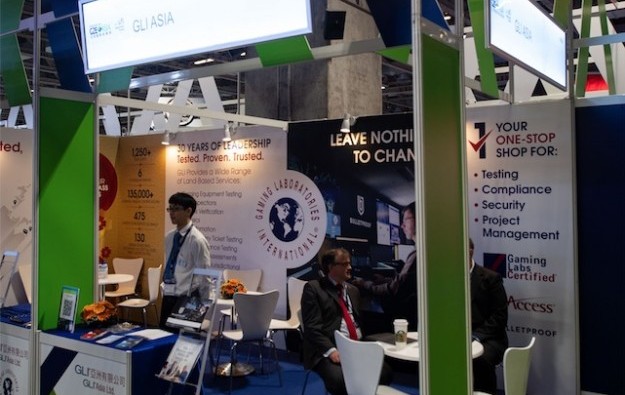 Gaming Laboratories International LLC (GLI), a specialist in testing and certification of gaming machines, is going to double its team in Macau.

The move will enhance GLI’s efforts as it assists clients in preparing for and complying with, updates expected next year to an administrative regulation in the city relating to casino gaming technology.

Ian Hughes, vice president of global services of GLI, gave the news of the expansion in comments to GGRAsia during the three-day Global Gaming Expo (G2E) Asia 2019 casino industry trade show that concluded on Thursday.

“With the new regulation that is coming in Macau, which will affect manufacturers and GLI, we are going to double our lab here,” Mr Hughes remarked.

He was referring first to amendments to Administrative Regulation No. 26/2012 on the “Regime for the Supply and Requisitioning of Gaming Machines, Equipment and Systems”.

Paulo Martins Chan, director of Macau’s casino regulator, the Gaming Inspection and Coordination Bureau – a body also known as DICJ – mentioned in 2017 that the relevant administrative regulation was to be updated. The Macau government said in its Policy Address for 2019 that such work was ongoing.

“The regulator has been holding open workshops for the industry, and there is an open dialogue among manufacturers, the regulator and testing laboratories,” Mr Hughes said, referring to the regulatory update process.

“We’ve been having an excellent dialogue; DICJ is cooperative, and the industry will continue to work closely so that the objectives can be met without impacting the industry,” he remarked.

“That’s all about timing but people have to listen and we are listening,” he added referring to the updated rules.

The executive revealed there were currently about eight engineers in the GLI Macau lab, a number that could be increased to between 15 and 20 in the next one to two years. Talking about the challenges of recruiting more people for the Macau team, he noted: “When you increase by 10 people in the U.S., that’s easy, but when you increase 10 people in Macau, that’s a doubling.”

Mr Hughes said Japan would become another important market for GLI in Asia alongside Macau, the Philippines and Singapore.

“The casino regulatory body will be established in the very near term, so there have been a lot of planning and preparation for what will be required in Japan,” he said. “We’ve been spending time understanding the market, understanding how things might work in Japan.”

The executive said GLI had been looking for partnerships with academic institutions such as universities in Japan in order to assist the firm in building a skilled labour force there. “We always have to maintain control but we are looking for some partners that can bring value,” he said.

“We are doing a lot on cybersecurity because casinos hold a lot of confidential information about their players,” he explained. “Though they have done a very good job at protecting the data, there are always opportunities [for cyber attacks].”