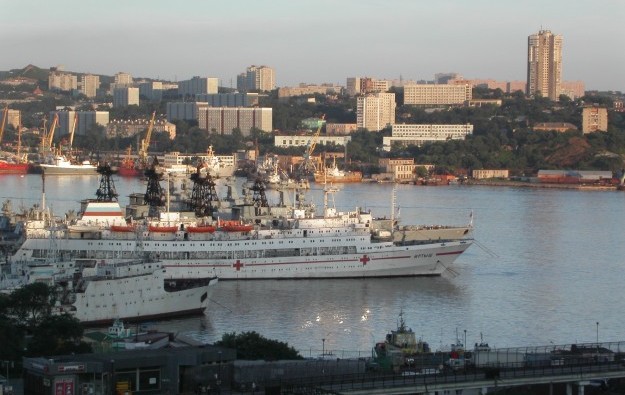 The institution said in a note it estimates gross gaming revenue in North Asia could reach US$375 million in 2016, rising to US$1.7 billion in 2020.

The bank added that Summit Ascent would have a first-mover advantage in the Vladivostok (pictured) gaming market in the Russian Far East when its first property in the Primorye gaming zone opens on the fourth quarter of this year, and would enjoy a three-year monopoly until 2018. That’s the point at which fellow Hong Kong-listed casino company NagaCorp Ltd says it expects to open its own resort project in the same region.

Goldman Sachs said it expected the casino venture in the Russian Far East to have junket relationships with Melco Crown’s Macau operation and to be well placed to capture underserved demand for gambling in North Asia.

The bank added that with one of the lowest effective gaming taxes globally and low labour costs, it expected Summit Ascent’s Russian casino project to be able to offer attractive player incentive schemes, drive 40-percent EBITDA (earnings before interest, taxation, depreciation and amortisation) margin and offer more than 60 percent return on invested capital on a project basis, compared with 20 to 30 percent in most Asian casino markets.

In September last year Mr Ho pledged to invest US$700 million in a gaming resort in Russia, signing a deal with the Primorye region administration during a Far Eastern investment congress in Vladivostok, according to Russian state news agency RIA Rovosti.

But in November Summit Ascent confirmed to the Hong Kong bourse that Oleg Drozdov, an indirect partner in the Russian casino project, had been arrested by police in that country. Summit Ascent said it was for “suspected business malpractices unconnected with the casino project”.

In a further filing in April 23 this year, Summit Ascent said that the “unexpected detention of Mr Drozdov has created unforeseen financing constraints in respect of the project”. Summit Ascent added that it was paying US$20.2 million to Elegant City Group Ltd, an entity owned by Mr Drozdov, in order to acquire a 14 percent equity stake in another vehicle called Oriental Regent Ltd. The net effect of the transactions, said the filing, was to increase Summit Ascent’s equity interest in the project from 46 percent to 60 percent. Under the same deal Firich Enterprises Co Ltd, a Taiwan-listed maker of electronic gaming machines, enlarged its stake to 20 percent, while Melco International retained a 5 percent stake.

Macau casino operator MGM China Holdings Ltd had a “record” market share in January, and its venues were the “highest-earning businesses” in the portfolio of the majority owner MGM Resorts... END_OF_DOCUMENT_TOKEN_TO_BE_REPLACED