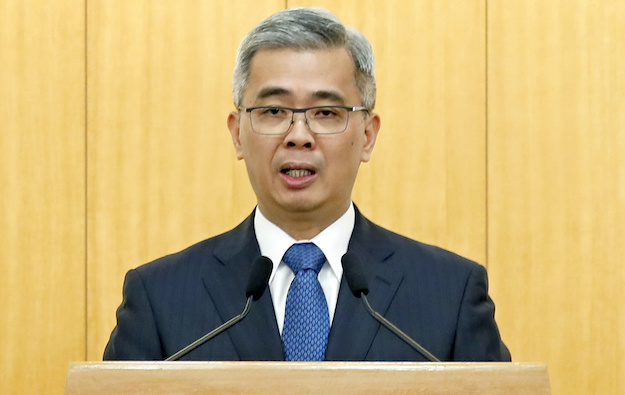 Macau’s Secretary for Security, Wong Sio Chak (pictured in a file photo), said on Thursday that there could be “good news” presently on what he termed the “border opening” process between mainland China and Macau. The border is not currently closed to travellers despite Covid-19, but various protocols have coincided with a greatly-decreased volume of people – including mainland tourists – moving between the places.

“The central government will coordinate soon each province to step up the works on border reopening with Macau, and see when this can be implemented. This hopefully is good news,” Mr Wong remarked.

The official did not mention – in the remarks aired by local public broadcaster TDM – whether his expected “good news” included a reinstatement of the mainland’s exit visa system for independent tourists, known as the Individual Visit Scheme (IVS).

Mainland China is the largest-single source of Macau’s tourists during normal times, according to Macau government data, and is thought – according to other research – to provide the majority of the market’s casino gamblers.

Mr Wong was speaking on the sidelines of a meeting of the city’s Legislative Assembly on Thursday.

The same day, the Macau government announced a fresh tightening of travel protocols for inbound movement from neighbouring Hong Kong, a city that has seen a recent uptick in Covid-19 cases.

The new requirement – with effect from 6am on Friday (August 7) – is that those inbound from Hong Kong must have a certificate proving they have tested negative for Covid-19 infection, that has been issued within the preceding 24 hours. Only this week, the Macau government had tightened the rule to say such a certificate had to be issued in the preceding 72 hours, rather than the preceding seven days.

A 14-day quarantine condition remains in place for all inbound travellers that have been in Hong Kong in the 14 days prior to arrival in Macau.

Shenzhen, the mainland city nearest to Hong Kong, is also imposing the new test certificate rule on inbound travellers from Hong Kong with effect from Friday. So is Zhuhai, next door to Macau, but which can be reached directly from Hong Kong, via the Hong Kong-Zhuhai-Macau Bridge.

In terms of the timing of news on prospects for normalisation of Macau-mainland China travel ties, Macau media outlets only reported in paraphrase on Thursday some commentary from Secretary Wong.

He said any such news would be announced by the mainland authorities and Macau’s Covid 19 task force, known as the Novel Coronavirus Response and Coordination Centre. The latter currently holds media briefings three times per week.

“All the works relating to border opening [normalisation]” with mainland China, were “in progress,” said Mr Wong.

He added the Macau government had been “coordinating each policy secretary to work” on such matters, and the process had been “smooth so far”.

A resumption in issuance of non-tourism visas for travel from Guangdong to Macau – effective from July 15 – was retrospectively confirmed by mainland officials at the end of July. Other mainland provinces are due to resume non-tourism visas to Macau from August 12.

Another incremental improvement recently was the removal, from July 15, of a rule whereby all mainlanders were required to undergo a 14-day quarantine in Guangdong, after returning from a trip to Macau.

On Thursday Mr Wong echoed the recent commentary of another senior local official, the Secretary for Economy and Finance, Lei Wai Nong, regarding a resumption of tourism in volume.

It is likely that Macau will shortly have a third round of citywide centre-based Covid-19 testing in little more than a week, after the results so far of a second mass test – that was due to finish... END_OF_DOCUMENT_TOKEN_TO_BE_REPLACED