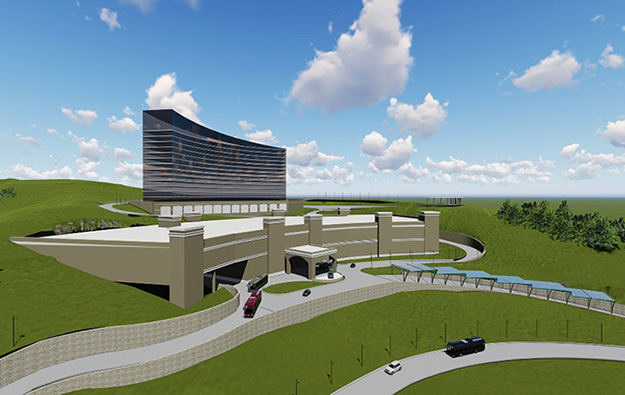 The successful development of the Primorye Integrated Entertainment Resort zone in the Russian Far East is of “great importance” to the local authorities. So said the deputy governor of the Primorsky Territory, Andrei Larin.

Mr Larin’s comments were featured in a press release sent to GGRAsia by Primorsky Krai Development Corp, confirming an agreement for the development of an additional casino project in the zone.

The local government-owned company is overseeing the zone, which is 50 kilometres (31 miles) from Russia’s Pacific port of Vladivostok.

The new casino scheme – called “Shambala” – is promoted by Shambala CJSC, a Russian firm reportedly involved in gambling operations in other parts of the country where gaming is legal.

The press release added that Shambala (pictured in an artist’s rendering) would feature “a large-scale project of a hotel and entertainment complex” involving a minimum investment of RUB8 billion (US$128.5 million). It is to include “at least 270 hotel rooms”, and no fewer than 500 slot machines and 50 gaming tables.

Shambala CJSC was the only firm to join an auction for two land plots in Primorye, according to the press release. The deadline for applications was May 28.

The aggregate area of the plots is 13.78 hectares (34.1 acres). Works are scheduled to start in September.

The Primorye Integrated Entertainment Resort zone “is of a great importance for the social and economic development of the region,” vice-governor Mr Larin said, in comments included in the release.

He added the the local government was focused on “providing the most comfortable conditions for cooperation and any kind of support to our partners implementing tourism projects in the Primorsky territory.”

The release stated that Mr Larin had “personally supervised” the conclusion of the investment agreement with Shambala CJSC.

The announcement also quoted Andrey Tarasenko, governor of Primorsky, stating that, “to date, the amount of investment agreements concluded with investors [in Primorye] has almost reached RUB70 billion,” of which “more than RUB10 billion was realised already.”

He added: “We can see the first results. After 2025 the project will bring about RUB10 billion to the regional budget each year.”

The only company that has so far built a casino in Primorye is Hong Kong-listed Summit Ascent Holdings Ltd. It opened phase one of its Tigre de Cristal resort in autumn 2015. Summit Ascent is currently working on plans for a phase two of Tigre de Cristal. Primorsky Krai Development said in its latest release that Summit Ascent planned to present its phase two plans to local authorities “this summer”.

Cambodian casino operator NagaCorp Ltd has also begun pile cap work for its casino resort in Primorye. Primorsky Krai Development stated in its release that completion of construction works is planned for 2019, with the facility opening in 2020. The first stage of the project is to include a four-star hotel complex with 279 rooms, “as well as casinos and [a] multi-purpose concert hall,” the document added.

A third investor, Diamond Fortune Holdings Prim LLC – a firm backed by Russian investors – reportedly began last year, ground preparation for its first casino resort in Primorye. The project, named Selena World Resort and Casino, should have completion of construction by the end of 2019”, according to a previous release from Primorsky Krai Development. A fourth casino project, also by Russian investors, is also planned for the zone.

At present, six Primorye plots with a total area of 27.59 hectares are still unoccupied. “Negotiations with potential investors are underway already,” stated the Primorsky Krai Development in its release.

China has moved one step closer towards reopening, by relaxing some its Covid-19 control measures, with most infected people now able to quarantine at home rather than in state-sanctioned... END_OF_DOCUMENT_TOKEN_TO_BE_REPLACED