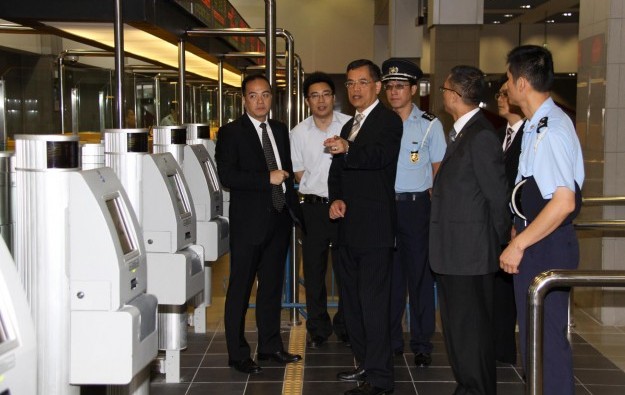 Macau is looking into tightening the term for the stay for mainland transit visitors to avoid abusing the policy, Secretary for Security Cheong Kuoc Va (pictured, centre) said over the weekend.

“We are very concerned about the people who buy visas near Gongbei [border crossing]. We will liaise with the police and immigration departments in the mainland to study the best way to prevent it from happening,” Mr Cheong told reporters.

That came as mainland and Macau media reported that the maximum stay of cross-border visitors to Macau will be cut from the seven days to three to five days as early as July. Macau immigration rules permit mainland passport holders to stay in the territory up to seven days if they use the city as a transit to other destinations.

“Our department will take measures to prevent people from abusing the policy,” Mr Cheong said. Zhuhai authorities also said they will tighten inspections near the border crossing to keep a closer eye on how visas to Macau and Hong Kong are issued.

A fortnight ago China Central Television (CCTV) revealed that travel agencies in Zhuhai and Shenzhen were suspected of assisting tourists from the mainland to bypass normal visa application procedures to visit both SARs.

A travel agency in Zhuhai featured in CCTV’s story was forced to close down last week. Authorities said the company didn’t have the proper licence to operate as a travel agency.

The reports dented Macau gaming shares last week but analysts have said the impact will be limited. In the case the Macau government only shortens the stay, the impact should be limited, Bank of America Merrill Lynch said in a report.

The broker said it believed the potential amendment is initiated by the Macau government and it is not a signal for a change in the central government policy towards the SAR.

Union Gaming Research Macau Ltd wrote in a client note last week: “Our gut reaction is that a low single digit percentage of visitations (at most) is likely at risk given that we believe the vast majority of visitors using the transit visa method are not coming twice per month every month…”

“We think that even in the event of a small decrease in visitations, these visitors whose trip frequency could be impacted, might, in theory, simply increase their per-trip gaming budgets,” the research house added.

Merrill Lynch said that in the worst case, where transit visas are completely forbidden for visiting Macau, the impact on gaming revenue could be about 3 percent to 5 percent only.

The state-run broadcaster said the companies would charge a fee between 180 yuan (US$28.9) and 280 yuan.

Macau is to create distinct zones on its casino floors and designated gambling chips that will be solely for the use of players from overseas. The moves will be part of a new gaming tax system to... END_OF_DOCUMENT_TOKEN_TO_BE_REPLACED