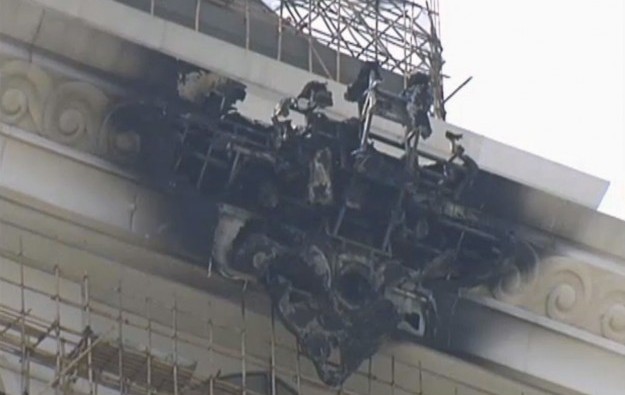 The Macau government has decided not to order any suspension of construction work at a yet-to-be completed 36-storey building at Galaxy Macau Phase 2, following a fire that partially destroyed the base of one of its ornamental cupolas.

“A team of technicians from the Land, Public Works and Transport Bureau has already conducted an on-site inspection,” a bureau spokesperson told GGRAsia on Friday.

“The bureau will not order the suspension of construction works because the fire only damaged the outside façade, not having affected the structural safety of the building,” the spokesperson added.

A preliminary assessment from the Fire Services Bureau indicated the blaze started after a worker forgot to turn off welding equipment. No one was injured by the fire, but more than 6,000 workers had to be evacuated while firefighters battled the flames.

Galaxy Macau Phase 2 is likely to open in mid-2015 according to previous statements by developer Galaxy Entertainment Group Ltd. The company had already stated that the fire would not cause any delay to the opening schedule.

Stocks of Macau casino operators rose substantially in the Hong Kong market on Monday, after the local government announced on Friday a bill proposing a new regulatory system for gaming... END_OF_DOCUMENT_TOKEN_TO_BE_REPLACED