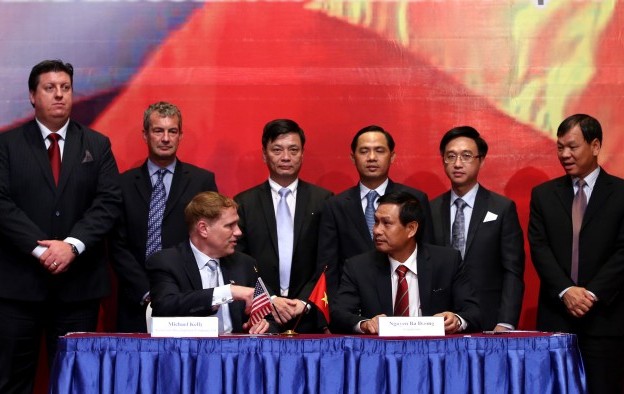 The promoter of the Grand Ho Tram Strip casino resort in Vietnam announced on Monday the signing of a memorandum of understanding with local developer Cotec Construction Joint Stock Co. It is to build a “US$75-million expansion” of the complex, according to a press release.

The new tower “will bring the development’s total investment to over US$1 billion,” according to the press release from Grand Ho Tram.

The memorandum of understanding was signed at a Monday event (pictured) hosted by the American Chamber of Commerce in Vietnam and the Vietnam Business Forum. It aimed to coincide with U.S. President Barack Obama’s historic visit to Vietnam this week.

The memorandum of understanding document outlines the construction by Cotec of the new hotel tower, which will add 559 rooms to the Grand Ho Tram Strip complex, increasing total capacity at the resort to 1,100 rooms.

In December, Ho Tram Project Co announced the development of a time-share condominium tower on the Ho Tram Strip. Cotec was also engaged for that project.

On November 6, it was revealed that Harbinger Capital Partners LLC, the main investor in the Ho Tram Strip, had confirmed a US$50-million capital injection in the development – the second injection of that amount to have been made by Harbinger during the 14 months up to November. Harbinger was founded by U.S.-based investor Philip Falcone.

The first phase of the Grand Ho Tram Strip opened its doors in 2013. It includes a 541 room five-star hotel, a casino, restaurants, meeting space, as well as a variety of entertainment facilities. Adjacent to the hotel tower, a 18-hole, Greg Norman designed golf course opened for play in 2014.

Currently under Vietnamese law, the casino is only allowed to serve foreign players.

Only two of Macau’s 18 satellite casinos – the Rio Casino and the President Casino – have closed amid changes to the city’s regulatory system for such properties, and against... END_OF_DOCUMENT_TOKEN_TO_BE_REPLACED