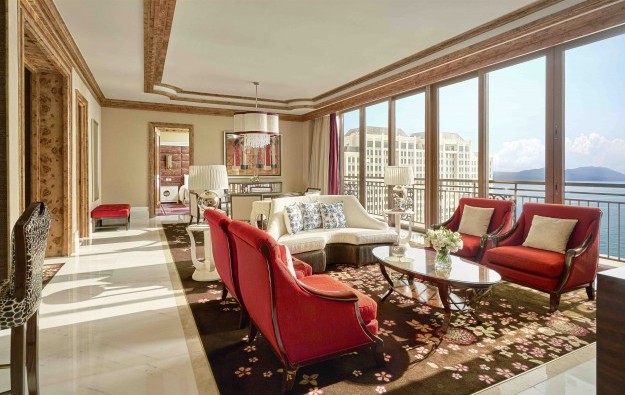 The planned rebranding of the Grand Ho Tram hotel, as the “InterContinental Grand Ho Tram” (suite pictured) will take place later this month, GGRAsia has been told. The information was from the operator of the casino resort complex The Grand Ho Tram Strip, in Vietnam, where the hotel is located.

Additionally, a new 502-room facility at the site, the Holiday Inn Resort Ho Tram Beach, is scheduled for launch “at the end of June”, according to The Grand Ho Tram Strip’s operating entity.

The Grand Ho Tram Strip, on the Vietnamese coast southeast of Ho Chi Minh City, was developed by the Ho Tram Project Company Ltd. The complex has a casino that is open only to foreigners.

Hotel and resort operator InterContinental Hotel Group PLC (IHG), owner of the InterContinental and Hilton marques, announced in 2019 that it was introducing two of its hotel brands to The Grand Ho Tram Strip.

The Grand Ho Tram hotel had been undergoing refurbishment prior to the planned InterContinental Grand Ho Tram rebranding, according to an IHG announcement at the time.

In 2019, IHG had also said it planned to introduce the Holiday Inn brand to The Grand Ho Tram Strip.

In March last year, Vietnam banned until further notice, most inbound travel by foreigners, as part of countermeasures against the Covid-19 pandemic.

The Grand Ho Tram Strip is being developed in a number of phases. The first phase of the project – featuring a hotel and casino – opened in July 2013.

The latter is the promoter of The Grand Ho Tram Strip and parent firm of the Ho Tram Project Company. Vietnamese investment firm VinaCapital Group Ltd has a minority stake in the controlling entity of ACDL.

Macau recorded 965 “gaming-related” crimes in full-year 2022, down 29.7 percent on the 1,372 identified in the previous year, according to the latest statistics published on Tuesday by... END_OF_DOCUMENT_TOKEN_TO_BE_REPLACED