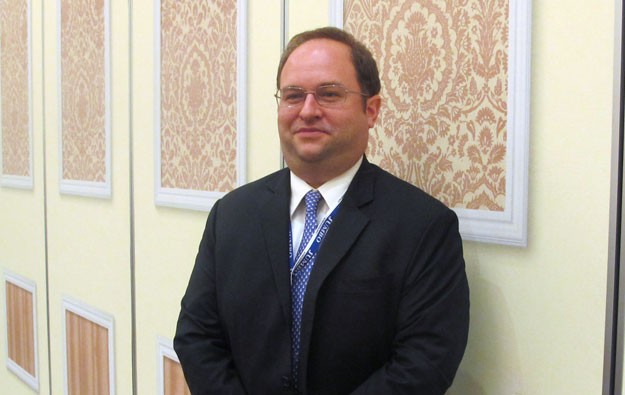 The second tower of The Grand Ho Tram casino resort in Vietnam is likely to open in the autumn of 2016, said Colin Pine (pictured), general director of Ho Tram Project Co Ltd.

“We’re excavating the piles for that [second hotel tower] right now. And we’re getting prepared to put on the podium,” Mr Pine told GGRAsia in an interview, referring to the structure on which the tower will sit . “We are planning [the opening] for the third quarter of 2016,” he added.

The Grand is a beachside resort located 120-kilometres (75 miles) southeast of Ho Chi Minh City. The first phase of the project opened in July 2013 with 541 five-star rooms. The Grand’s second tower will add another 559 rooms along with additional entertainment amenities, according to previous press releases.

Investors have so far spent approximately US$700 million on the casino project, said Mr Pine.

The executive stated that the company is currently talking to a potential partner for the second hotel tower. “Final documents are now being negotiated,” he said.

“We’re designing this building in a kind of way that there will be a number of condo units or the ability to sell them as condo units,” he said. “We’re not sure we want to sell them yet.”

When The Grand opened in 2013, the Vietnamese casino market consisted of small- and medium-sized properties mostly in the north of the country, close to the land border with mainland China. That region already has a proven appeal to overseas players. They are important to the country’s casino industry, in the absence of locals being allowed to gamble in Vietnam.

But Vietnam’s government is reportedly considering a draft decree for the gaming industry. According to some reports it is likely to codify regulations for casino licensing and operations, and could possibly allow some local citizens to enter casinos under certain conditions.

The Grand casino resort hopes to be chosen for any pilot scheme the Vietnam government might launch allowing locals to gamble, Mr Pine told us.

“It’s our view, based on the conversation we had, that it is very likely that [allowing Vietnamese to enter casinos] will initially be done as a pilot project, meaning that there would be some form of time frame on it, where it would be assessed,” said Mr Pine.

“If that’s the case, then we think we are very well positioned to be called upon to work with the government to set up a pilot project to look at how they would open casino gaming to nationals.”

The Ho Tram executive recalled that there has been talk about the Vietnamese government creating a casino masterplan, under which only a limited number of provinces would be allowed to have integrated resorts with casinos.

In May, Augustine Ha Ton Vinh, senior investment advisor for Vietnam’s Van Don Special Economic Zone, said during a conference session at Global Gaming Expo (G2E) Asia that a new decree guiding casino operations in the country could be launched in six to 12 months.

“I agree that it could happen in the very near future,” Mr Pine told GGRAsia in the interview last month.

Towards the end of last year, The Grand saw a big uptick in rolling chip volume, said Mr Pine, although he did not disclose exact numbers.

“Part of that was because of an experiment we did with how we are issuing credit or paying terms,” explained the executive, saying that the company is still evaluating the strategy “because we are not sure if we calibrated [it] correctly”.

“On the mass side, we’ve seen all the metrics moving in the right direction, including: cage drop, table drop, average bets, length of stay at the table – so we’ve seen really significant improvement in our direct customers,” Mr Pine added.

The beginning of 2015 “has been a little bit more rocky”, admitted Mr Pine, adding that the mass segment has “continued to grow consistently”. He stated: “In the VIP, there are still a few things that we are experimenting with, so I think it’s too early to judge what the results might be.”

The company has however shifted some of the VIP tables to the main casino floor, a move Macau casino operators started doing last year amid declining VIP revenues. When The Grand opened, it had up to 55 gaming tables for VIPs.

“What we have done recently is to put a few more [tables] to the main casino [floor], focused on premium mass,” Mr Pine told us.

Asked if the company is seeing any negative impact on its operations because of the anti-graft campaign in mainland China – which investment analysts have linked to the declining casino revenue in Macau – Mr Pine said there were no concerns: “If there’s an impact, it hasn’t been a major one. We’re still getting good groups from mainland China and from other countries.”

The collaboration from Chien Lee, a founder of Macau junket room investor Iao Kun Group Holding Co Ltd, has also helped increase the number of visitors to the property. In July last year, Mr Lee put in US$20 million to Ho Tram via his Florida-based entity NewCity Capital LLC.

“Chien and the consortium he put together have been working very hard and helped to bring a number of groups to the property. He has introduced us to a number of partners in Macau and elsewhere and has helped us in formulating a lot of the thinking about which markets we want to go after and how we want to attack those markets,” said Mr Pine.

Ho Tram is also keen on diversifying the tourism facilities at the property.

In October, the company added a US$22-million golf course called The Bluffs, designed by one of the sport’s stars, Greg Norman. In April, Ho Tram announced that it would host a leg of the Asian Tour tournament from December 3 to 6, 2015, with a cash prize of US$1.5 million.

England’s Robert Rock, the course’s brand ambassador and a two-time winner on the European Tour, will be among the players competing in the inaugural Ho Tram Open, the company said.

“There are some pretty good names on that list,” said Mr Pine. “We’re planning some other big gaming-focused events, both immediately before and around that [golf] event.”

He added: “We got a lot of good feedback from all of these initiatives. The other thing we’re doing is trying to build a level of loyalty among the expatriate community living in Vietnam by having much more regular events at the property.”

The imminent return of package tours from mainland China will not only help boost Macau’s tourism businesses, but is also expected to help casinos gain more foot traffic in their mass gaming... END_OF_DOCUMENT_TOKEN_TO_BE_REPLACED