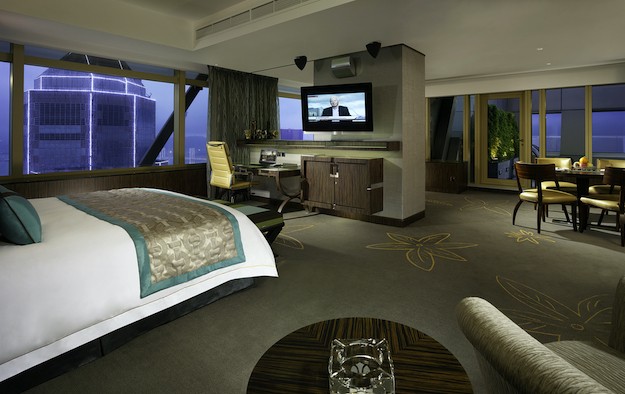 The room-occupancy rate at SJM Holdings Ltd’s Grand Lisboa Hotel on Macau peninsula might reach circa 50 percent for December, said on Thursday a member of the venue’s management team.

Henry Kong Fuk Leung, hotel manager, mentioned the figure – cited in local media reports – on the sidelines of the launch on Thursday of a so-called ‘pop-up’ Christmas-goods shop in the lobby of the property.

Mr Kong added that the venue’s room-occupancy rate had risen to the range of 30 to 40 percent since mainland China’s autumn Golden Week holiday in October. The hotel has 431 rooms, according to Macao Government Tourism Office (MGTO).

Quarantine-free access to Macau has only been available to most mainland China residents since September 23, at the tail end of the third quarter.

SJM Holdings said in highlights of its third-quarter performance lodged with the Hong Kong Stock Exchange in late October, that average hotel occupancy at Grand Lisboa – a property in an entirely urban setting – had been only 5.3 percent in the three months to September 30, with an average room rate of HKD1,695 (US$219) per night.

According to data collated by MGTO, in September this year market-wide in the city, hotel occupancy had been 16.7 percent, compared to 84.6 percent in the same month a year earlier.

Some local casino resorts, particularly in the Cotai district of the city, had been marketing their properties to so-called “staycation” guests – i.e. locals – prior to the return of mainland tourists.

In third-quarter 2019, the Grand Lisboa Hotel’s average room-occupancy rate had been 91.3 percent, with an average room rate of HKD1,516 per night.

Mr Kong said in his Thursday comments that rates for Grand Lisboa rooms (example pictured) were down between 20 and 30 percent compared to last December, which he suggested might be attractive to tourists for neighbouring Guangdong province, who might otherwise make only a day trip to the city.

According to data from the Macau Hotel Association, published by MGTO on Thursday, October saw average Macau hotel occupancy rise to 42.8 percent, versus 88.6 percent a year earlier.

For five-star hotels – the category of the Grand Lisboa Hotel – the October occupancy level was 40.0 percent, compared to 90.0 percent in October 2019.

The year 2024 is still the targeted start date for operation of a five-star hotel and casino complex at the Westside City Project (pictured in an artist’s rendering) in Manila, the Philippine... END_OF_DOCUMENT_TOKEN_TO_BE_REPLACED