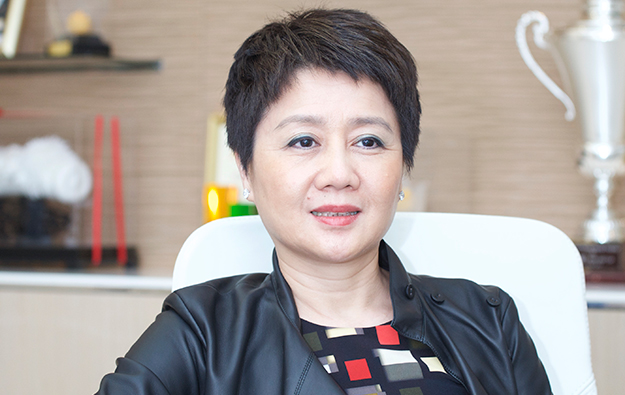 VIP play will be a prominent feature of casino operations at SJM Holdings Ltd’s Grand Lisboa Palace, Angela Leong On Kei (pictured), an executive director of the firm, told GGRAsia in an interview.

“We’ll have VIP [gaming] there [at Grand Lisboa Palace]. We have renovations and designs at the property specifically for VIP play,” said Ms Leong. “And we have branded hotels there, which could be used for promotion [for VIP gaming].”

The company hopes to open its HKD30-billion (US$3.9-billion) property in Macau’s Cotai district in 2018, said Ambrose So Shu Fai, the firm’s chief executive, in comments on August 10.

Market rival Melco Crown Entertainment Ltd eschewed VIP gaming when it opened its majority-owned Studio City property on October 27 last year. It has since announced it will have VIP rooms after all.

The MGM Cotai casino resort, in Macau’s Cotai district, is likely to open “only with mass tables”, said the chief executive of MGM China Holdings Ltd, Grant Bowie, in comments on August 9.

The desire of some Macau casino operators to focus less on high-end play and more on mass-market gambling is against the background of a sustained market decline in high roller baccarat revenue.

This has been spurred – say some investment analysts – by China’s anti-corruption crackdown, and the fact that mass-market play typically offers a higher margin than the VIP variety due to the lower reinvestment costs necessary to attract and retain the mass players.

Macau market watchers have long associated SJM Holdings with VIP business. A firm nod to that tradition can be seen in the plans for Grand Lisboa Palace.

Two of the branded hotel towers that Ms Leong was referring to for the new property are “Palazzo Versace” and “Karl Lagerfeld”, named respectively for iconic European fashion designers popular among some of China’s wealthiest people.

Each of those hotels will have more than 200 rooms and suites, according to Ms Leong. With the contribution of another hotel – the company’s self-branded, Grand Lisboa Palace – the Cotai project will provide approximately 2,000 rooms in total, according to the firm’s interim results announcement.

Regarding the gaming mix intended for Grand Lisboa Palace, Ms Leong – the fourth consort of Stanley Ho Hung Sun, the founder of SJM Holdings – said the firm would develop next year a more detailed plan for VIP play, nearer to the opening date for the resort.

“We’ll have it [VIP gaming] at Grand Lisboa Palace, but we will still mainly develop mass gaming, and family-focused tourism services and entertainment,” she said.

“I believe that a reason why some [Cotai casino resorts] are opening first with mass tables-only is that many VIP gaming promoters are also looking at the casinos’ revenue, operating conditions and client sources,” Ms Leong told GGRAsia.

She added: “They [VIP gaming promoters] are checking the new properties and how the cooperation with the casino operators can go forward before deciding any entry there.”

SJM Holdings’ CEO Mr So reiterated in his August 10 remarks that Grand Lisboa Palace can accommodate up to 700 live gaming tables.

The firm was planning to apply to the Macau government for up to 500 new live gaming tables for the Cotai project, Mr So had mentioned in May. The government operates a cap on how many new-to-market live tables can be added to the Macau casino industry between 2013 and the end of 2022.

A note on August 8 from brokerage Daiwa Securities Group Inc – following the release of SJM Holdings’ interim results – noted management commentary that it had an “ample supply of tables” that could be shifted from its Macau peninsula properties to its new one on Cotai.

Grand Lisboa Palace will have shopping as part of its non-gaming offering, in common with other Cotai resorts. The firm intends create a portfolio of shops with “mass appeal” at the Cotai property, Ms Leong stated.

“The direction we’re going is that we have to make the [hotel] residents here spend more at the property,” Ms Leong noted. “We cannot really go [always] for the very high-end [customer].”

When the casino operator announced the start of construction on the Cotai project in February 2014, it noted guests would be able to enjoy “luxury shopping” at a themed retail mall.

“We’re going to improve our plans [for the retail part], as we’ve seen changes in the market now,” she stated.

“When we look at the plan of the Cotai project, it is positioned to be upscale. But we believe that in this year and next, we’re going to plan for more mass appeal content there,” the SJM Holdings executive added.

The firm had previously announced that the non-gaming features of Grand Lisboa Palace would include a number of Michelin-starred restaurants, a wedding pavilion and a multi-purpose theatre.

On top of these non-gaming features, the Cotai property will also have a “museum”, Ms Leong additionally told GGRAsia. She declined to give further details about the content of the museum.

Regarding the likely overall performance of the gaming segment at the new property, Ms Leong said the firm was looking to increase mass-market revenue as a proportion of total gaming revenue.

In the half-year results, revenue from mass-market tables and slot machines accounted for 51.3 percent of SJM Holdings’ gaming revenue.

The casino operator is looking to stimulate further the non-gaming spend of visitors and to drive up the mass gaming business by improving the firm’s customer loyalty programmes.

“In this [mass market] segment we will offer more rewards, so that more mass customers and family customers will come to us. They will be offered not only the gaming options [points accumulated from gaming loyalty programmes], but also dining ones,” Ms Leong said.

“This programme is not restricted only to those that have a reached a certain threshold of gambling in our properties, but can also be enjoyed by those that often stay in our hotels when they visit Macau, or those that come to our properties several times a year and often consume our services,” she explained.

“With continued reinvestment in the mass business, particularly in its loyalty and incentives programme, [SJM Holdings’] management remains upbeat that it can fend off market share deterioration upon the new property openings of Wynn Palace and the Parisian in August and September, respectively,” wrote Daiwa in its August 8 note.

In the same note, the brokerage also cited the expectation from SJM Holdings’ management that Macau room rates will see more downward pressure with more hotel supply being added in the city.