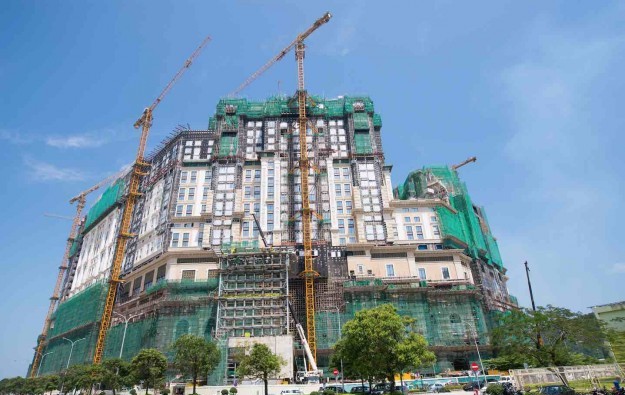 Suspension of construction work at SJM Holdings Ltd’s new Cotai casino resort Grand Lisboa Palace remained in place as of Wednesday morning, 10 days on from a fatal accident there, a spokeswoman for Macau’s Labour Affairs Bureau has confirmed to GGRAsia by telephone. The person added that the duration of suspension would depend on the outcome of bureau checks at the site.

The work halt was ordered by the Macau government on June 18. That day a 47-year-old worker from mainland China died after falling 10 metres (33 feet) at the HKD36-billion (US$4.63-billion) project (pictured).

GGRAsia asked SJM Holdings how long the suspension might last. The public relations department from Grand Lisboa Palace did not address that question, but told GGRAsia in a Tuesday email: “SJM [Holdings] is cooperating with the Labour Affairs Bureau for the investigation being carried out.”

SJM Holdings’ Tuesday email noted: “We will continue to conduct frequent inspections and [ensure a] safe working cycle, [and] provide safety training as well as tightening supervision, to ensure strict compliance to all safety requirements by all our contractors/subcontractors at the site [in order] to protect our workers.”

The Labour Affairs Bureau had issued a statement on June 18 saying that the Grand Lisboa Palace contractor had to submit an investigation report on the incident, and could only resume work after receiving approval from the bureau.

Angela Leong On Kei, an executive director of SJM Holdings, told GGRAsia in an interview last year that Grand Lisboa Palace would add approximately 2,000 hotel rooms to the local market. She added that a prominent feature of casino operations would be VIP play.

A casino cruise brand reportedly controlled by Malaysian entrepreneur Lim Kok Thay is to launch services from Singapore fewer than five months after the Lim family-founded Dream Cruises brand of the... END_OF_DOCUMENT_TOKEN_TO_BE_REPLACED