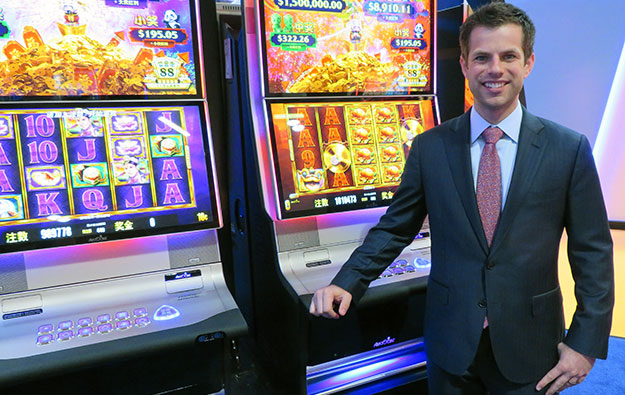 Slot machine maker Aristocrat Leisure Ltd’s business has been performing strongly in Asia so far in 2018, says Chris Rowe, the firm’s managing director for Asia Pacific. That is despite there being fewer new major casinos opening in the region in 2018 as compared to previous years.

“We still see strong momentum on the back of the core Aristocrat brands, with or without openings,” Mr Rowe (pictured) told GGRAsia on the sidelines of the MGS Entertainment Show 2018, taking place in the Venetian Macao casino resort until Thursday.

He described 2018 as a “great year”. Mr Rowe added: “We were not expecting as many new openings this year but have seen great loyalty in terms of refresh,” he said, referring to casino operators updating their equipment on casino floors.

“We are seeing lots of activity outside of Macau and in Greater Asia,” including the Philippines and some expansion in Vietnam. “The Philippines continues to excite as a slot market that craves new product.”

New casino openings are important for casino equipment suppliers, as new venues need to order large quantities of product to equip their respective gaming floors. In Macau, there was only one large-scale casino opening in 2018: the MGM Cotai casino resort, which launched to the public in February. Morpheus, a new hotel tower at City of Dreams Macau, opened in June, but is focused on table games for high-betting players.

Mr Rowe said he expected Aristocrat to continue to perform well next year. “It is shaping up to be a good 2019,” he stated.

“We will see more going on in Vietnam over time, and we continue to spend time in Cambodia, Malaysia, Singapore… but we will see some opening in Macau with Grand Lisboa Palace towards the end of the year.”

Grand Lisboa Palace is being developed by Macau-based casino operator SJM Holdings Ltd in the city’s Cotai district. The resort is due to open in the second half of 2019 according to statements by its promoter.

At a corporate level, Aristocrat has since 2017 relocated a number of senior management executives from Australia to the United States, including company chief executive Trevor Croker. Many of the Australian group’s largest customers are based in the United States. Mr Rowe however said the change would not impact the company’s operations in Asia.

“I don’t see any impact from the movement of management. We are still very much an Australian company, listed on the Australian Stock Exchange,” Mr Rowe stated.

“We have a lot of autonomy as an Asia-Pacific region [unit] and we run ourselves as a business unit receiving great support [from management]. That great support can come from anywhere, as long as the games keep flowing in.”

Aristocrat is exhibiting at MGS Entertainment Show 2018 a lot of new product it plans to introduce to the Macau market in the near future.

“We have got a very strong link portfolio and we have a lot going on in the standalone space,” said Mr Rowe. He added that standalone games were doing “very, very well” among those people that like to play slot machines configured for higher denominations. They included players classified by casino operators as being in the premium mass segment.

“In Macau, in particular, we are seeing slots grow and a lot is driven by that high-value player,” said Mr Rowe.

Gross gaming revenue from slot machines in the Macau market stood at MOP11.14 billion (US$1.38 billion) in the first nine months of 2018, up by 16.8 percent in year-on-year terms, according to official data compiled by the city’s gaming regulator.

One of the new products Aristocrat is exhibiting at MGS Entertainment Show is link “Gold Stacks 88”, still pending regulatory approval for Macau. The game has already been launched in the United States, where “it is doing very, very well,” said Mr Rowe. “We have done a lot to it to bring it to this market, in terms of optimising for currency, languages and jackpots,” he added.

The game “takes famous characters from our heritage and makes them babies, which makes them playful and fun to interact with, and we know that is popular,” explained Mr Rowe, referring to slot machine characters featured on the company’s products over the years.

Aristocrat is also showcasing at the trade show “Spin It Grand”. “It follows up on a very popular game in this market called ‘Super Wheel Blast’”, said Mr Rowe, adding that this was also a new product, pending regulatory approval for Macau.

“Spin It Grand” uses a wheel mechanic to deliver credit prizes, growing credit prizes and jackpots during Aristocrat’s ‘Hold ‘n’ Spin Feature’. Its base titles have different levels of standalone progressives and can be seen on the Arc Single, Helix and Viridian Widescreen cabinets.

In the standalone segment, Aristocrat is displaying the game “9 Princes of the Dragon King”, also yet to be released in Macau. According to the firm’s promotional materials, it “offers players a chance for extremely frequent free games features, through the use of innovative game mechanics.”

Other new game titles include “Dragon of the Eastern Ocean” and “Lucky Festival”, “which came out from underneath a very successful link in Asia called ‘Good Fortune’,” said Mr Rowe. “We took two of the unique base games that sit underneath ['Good Fortune'] as standalone games, to increase our presence to the VIP and the premium mass segment.”