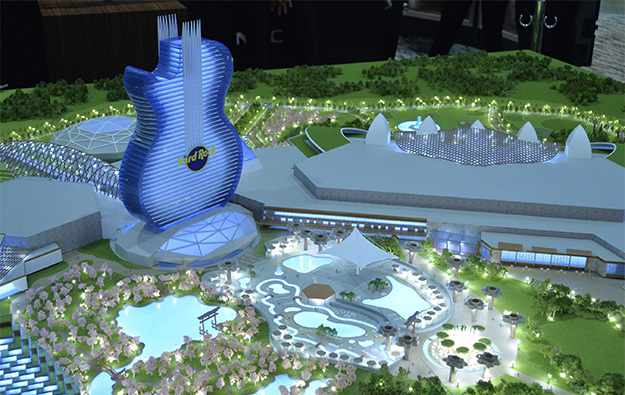 International casino operator Hard Rock International Inc has given further detail on its proposal to develop a casino resort in the city of Tomakomai, on the Japanese island of Hokkaido, the latter a popular destination for international tourists.

Hard Rock said that “key elements” of its project (pictured in an artist’s rendering) included: monorail access to the property from the nearby Chitose International Airport; a guitar-shaped hotel tower based on Hard Rock’s signature branding; a Four Seasons hotel; a Hard Rock Live entertainment venue; multipurpose “Broadway-style” theatres, a centre focused on health and well-being; and more than 215,000 square feet (19,974 sq metres) of retail and dining space.

The firm also announced a number of partnerships for its proposed casino resort in Hokkaido, including with American professional baseball team the New York Yankees and with Nederlander Worldwide Entertainment LLC. The latter is a U.S.-based entertainment company that manages theatres and presents Broadway-style productions in international markets.

In addition, Hard Rock said it would bring the “latest facial recognition and security services” to its project in Hokkaido, in partnership with Japanese technology provider NEC Corp.

The property would also feature a “Music Rock-n-Roll Hall of Fame”, aiming to “bring praise and awareness to the musical accomplishments of Japanese, Asian and global artists”.

“We are extremely excited about the prospect of introducing our Hard Rock family to the people of Hokkaido, Japan with this world-class entertainment resort,” Hard Rock’s chairman and chief executive Jim Allen said in a prepared statement included in a company press release.

He added: “It will not only bring economic benefits to the local community, but also act as a gateway to learn more about the wonderful heritage of Japan and all that it has to offer.”

Hard Rock has been investing in building up its public profile in Hokkaido. The company has announced it will participate in the upcoming Sapporo Snow Festival, which is celebrating its 70th anniversary this year. Hard Rock said it was developing “a massive snow sculpture, towering over four stories and showcasing famous Japanese animated rock star Hatsune Miku” to be showcased at the 2019 event.

The firm is also sponsoring the Hokkaido Consadole Sapporo Professional Soccer Club. During his visit to Hokkaido last week, Mr Allen contributed a personal check of US$100,000 to the soccer team’s Hokkaido Earthquake Charitable Relief Fund, which provides aid to Hokkaido residents affected by a September earthquake, stated the Hard Rock press release.

Several major global gaming operators have affirmed their respective interest in developing a casino resort in Japan. A number of industry executives expect the first casino licences to be issued in around the year 2020, with the first resorts to open for operation in circa 2025.

Up to three casino projects will be permitted at yet-to-be determined locations across the country under a first wave of casino liberalisation. Hokkaido has consistently been mentioned as a potential location for one of Japan’s first such venues.