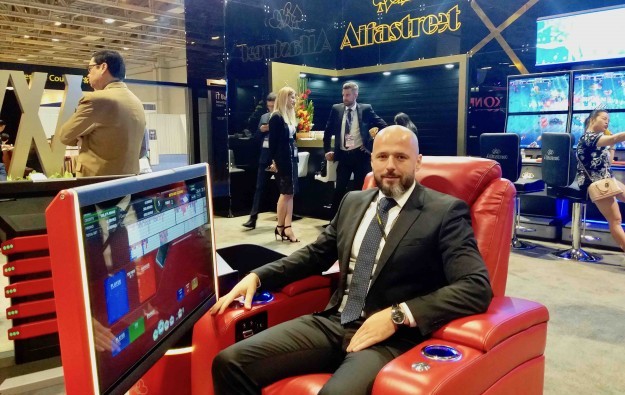 With that in mind, it has introduced a new VIP chair for such patrons of its ETGs.

It looks akin to a pod-style first-class seat on an airline, with a game touchscreen that is mounted in such a way that it can be swivelled to suit the player’s need.

“We installed this for the first time in February in a Philippine casino. We have 14 of them over there,” said Albert Radman, Alfastreet’s sales director, in comments to GGRAsia.

He was speaking on Tuesday, the first day of the Global Gaming Expo (G2E) Asia 2019, a casino industry trade show and conference at the Venetian Macao resort in Macau.

He noted there were “plenty” of casinos in the region that offered dedicated areas for VIP play on ETGs.

Even in a stadium-style set up, “when you do the seating, you can set up a special area for VIP players, using our VIP chair product,” stated Mr Radman.

The games available to players using those chairs can have “bet limits and other parameters of the game” modified specially for them, said the Alfastreet executive.

The seat offers a USB charger as well as drink holders and footrests and backrests that can be operated at the touch of a button.

“This is something special because Asian players like to be pampered,” said Mr Radman, demonstrating some of the chair’s features.

The Alfastreet sales director told us the firm had also been refreshing its traditional multi-terminal products. What he termed the firm’s “classic R8” – an eight-player roulette – now had a “brand-new design”.

He described business in the Asian region – particularly in the past two to three years – as “very, very good”.

In the Singapore casino market Alfastreet had been engaged in a scheduled replacement of close to 600 ETG units, “which for Asia is a big number,” he stated.

“In the Philippines we had a major installation – with 144 units. It is truly the most advanced stadium system, where players can play 19 games at the same time; it  is something unique,” said Mr Radman.

Alfastreet has a technical support team based in Malaysia, which it says can serve customers in the region 24 hours per day. For large installations, technical staff from Slovenia might also fly out to assist.

The firm has also recorded ETG sales in Cambodia, Vietnam, Laos, and Macau.

“Altogether we are very, very happy with this region right now; but we are looking to improve even more, on behalf of our customers,” noted Mr Radman.

The Macau government announced on Tuesday tightening of its Covid-19 testing requirements for front-line casino staff, halving the interval between nucleic acid tests to every two days, from every... END_OF_DOCUMENT_TOKEN_TO_BE_REPLACED