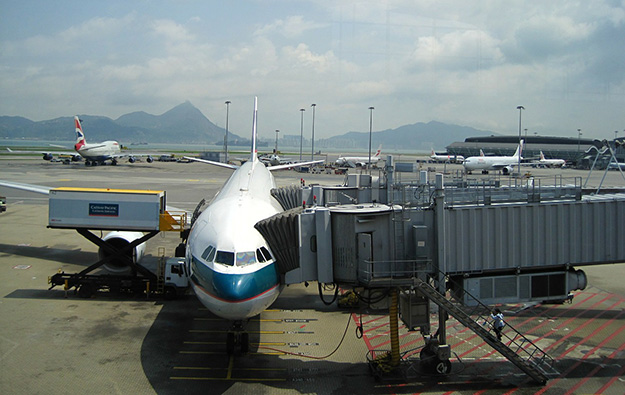 The closing of the Hong Kong International Airport on Monday and at least part of Tuesday – after thousands of anti-government protesters occupied its arrivals and departures halls – is likely to have only a short-term impact on Macau’s casino sector. So said brokerage Nomura in a note issued on Monday.

“We expect the closing of the Hong Kong airport to pressure near-term visitation to Macau,” wrote analysts Harry Curtis, Daniel Adam and Brian Dobson. “The impact should be transitory and visitation should recover once the airport reopens,” they added.

The majority of gamblers in Macau’s casinos are tourists. A significant number of those use the Hong Kong airport – one of the world’s busiest air hubs – to access Macau.

In a statement on Monday afternoon, Hong Kong’s airport authority said it would temporarily cancel all flights that were not yet checked in, due to disruption to operations caused by the anti-government protests.

As of 8:00am, a total of 160 departing flights and 150 arrivals, due to leave or land at the Hong Kong airport between midnight on Monday evening and 11.55pm on Tuesday, had been cancelled, according to local newspaper South China Morning Post.

“We are beginning to see a negative impact from the protests in Hong Kong which is causing some transport disruption (on weekends largely so far) and beginning to create a headwind to China visitation into Hong Kong (and onward visitation into Macau),” said brokerage Sanford C. Bernstein Ltd in a Monday note.

The management of casino operator Wynn Macau Ltd admitted last week – during a conference call with investment analysts – a negative impact to the city’s casino sector from regional transport disruption caused by the ongoing mass protests in neighbouring Hong Kong.

“When you have hundreds of flights cancelled out of Hong Kong and some reluctance to travel, I do think that that is impacting the premium-end the business,” said company chief executive Matt Maddox.

Wynn Macau Ltd president Ian Coughlan added at the time: “What’s happening in Hong Kong… is certainly going to impact business in the short-term. There has been disruption to people movement between Hong Kong and Macau and it looks like it’s going to continue for the next few weeks at least.”