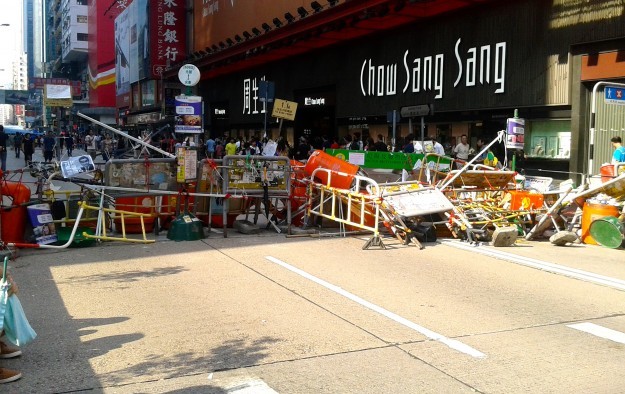 The Agence France-Presse and Reuters news agencies reported on Monday morning that Hong Kong police were massing around barricades near the Admiralty district of the city.

The barricades were first set up there and in the Central and Mong Kok districts of Hong Kong a fortnight ago as part of the ‘Occupy Central’ movement protesting at the decision of China’s central government to vet candidates for the city’s elections in 2017.

Credit Suisse AG on September 30 said in a note that Hong Kong’s ‘Occupy Central’ movement might have a “marginal negative” impact to Macau’s gaming industry.

The Credit Suisse analysts said the protests might have a short-term impact on visitors from mainland China who normally visit Hong Kong and Macau as part of a package.

Several media outlets reported last week that authorities on the mainland had reduced mainland tourists’ access to Hong Kong – and by extension Macau, as many Chinese mass tourists go on a two-city tour – while the protests continued.

The foot traffic at Macau Maritime Ferry Terminal appeared to be much lighter at the weekend. Key tourism districts of Macau including Senado Square also appeared much less busy than usual.

BBC World News, quoting protestors, said the Hong Kong police in Monday’s action were not wearing riot gear but were wearing high visibility vests and appeared to be preparing to remove barricades that have been in place for a fortnight. They were also said to be gathering at the other protest sites in Central and Mong Kok (pictured).

The Macau authorities announced on Friday some of the key aspects of a bill proposing a new regulatory system for gaming that will shape how the industry looks for years ahead. Macau’s Executive... END_OF_DOCUMENT_TOKEN_TO_BE_REPLACED