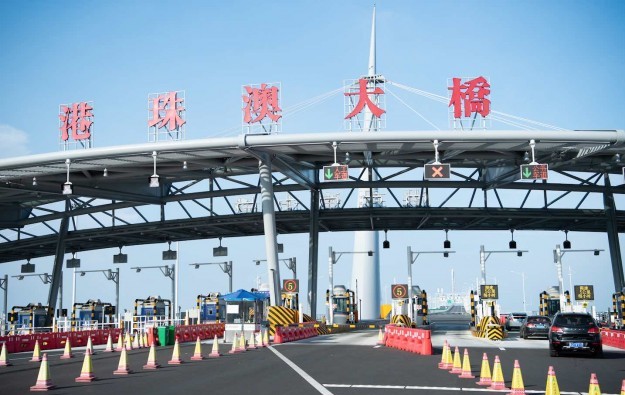 The Macau casino operators’ decision – said to have been reached after talks with the local government – to run a joint shuttle from the Hong Kong-Zhuhai-Macau (HKZM) Bridge (pictured) to the two public ferry terminals rather than direct from the bridge to the casino resorts, was in order to avoid adding more casino shuttle bus trips to Macau’s already-crowded roads.

So said Macau’s Transport Bureau in an email to GGRAsia. “Such arrangement corresponds to what our bureau have been working on, which is, the promotion of the collaboration between the gaming companies in the operating of their shuttle bus service, as a means of controlling the number of vehicles and relieve the pressure on traffic,” a spokesperson told us.

Macau’s casino shuttle buses are not permitted to cross the HKZM Bridge itself. But the industry’s joint shuttle service is allowed to connect the Macau boundary checkpoint on the HKZM Bridge to, respectively, the Outer Harbour Ferry Terminal on Macau peninsula and the Taipa Ferry Terminal, where passengers can use other methods of transport – including existing casino shuttle bus services – to head to the various casino resorts.

According to the bureau’s information, the joint casino shuttling service inbound and outbound from the bridge are allowed to run from 10am to 11pm.

“The…arrangement is the result of the discussions that our bureau had with the six gaming companies, based on the fact that, in order to secure the daily operation of transportation between the border checkpoint and the two ferry terminals, only 11 jointly operated buses will be enough,” the bureau’s spokesperson stated.

Several licensed bus services have already announced of their cross-border trips that will take passengers to travel between several casino resorts in Macau and Kowloon in Hong Kong via the HKZM Bridge. The bridge, which spans 55 kilometres (34 miles) and is the longest sea-crossing bridge in the world, was opened to traffic from 9am on Wednesday.

On Wednesday, Macau gaming operator Sands China Ltd held a welcoming ceremony at the Parisian Macao for guests that arrived on the first trip by one of the commercial services that is licensed to cross the bridge to and from Hong Kong. The “One Bus” service had set out from Kowloon in Hong Kong.

“The opening of this mega bridge marks another milestone in cross-border integration. It can greatly shorten the traffic time between Hong Kong, Zhuhai and Macao, thereby contributing to the forming of a ‘one-hour quality living circle’ in the Guangdong-Hong Kong-Macao Greater Bay Area,” Sands China’s president Wilfred Wong Ying Wai was cited as saying in a prepared remarks as contained in a press statement announcing the firm’s Wednesday welcoming ceremony.

Another Macau casino firm, Galaxy Entertainment Group Ltd also held a celebration on the same day for an inaugural journey run by another cross-bridge commercial bus service in the opposite direction. “Hong Kong-Macau Express” set off from Galaxy Macau, and took passengers to the Elements shopping mall in Kowloon.

The verdict – and eventual sentencing – in the case involving Alvin Chau Cheok Wa (pictured in a file photo) and other defendants linked to the now-defunct Macau casino junket Suncity Group Ltd... END_OF_DOCUMENT_TOKEN_TO_BE_REPLACED