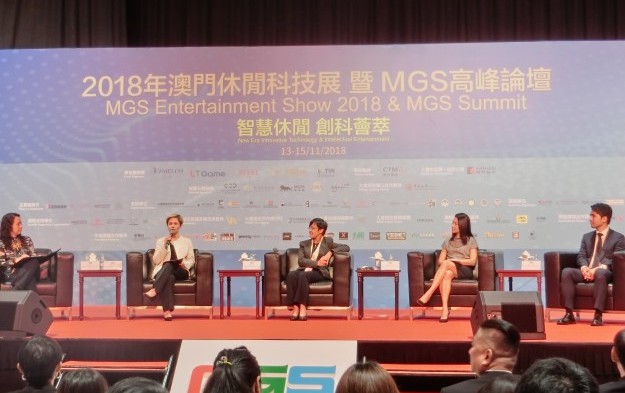 It will take “at least a month more” to observe what impact the recently-opened Hong Kong-Zhuhai-Macau (HKZM) Bridge might have in boosting the number of Macau-bound visitors, the head of the Macao Government Tourism Office (MGTO) remarked on Wednesday.

But MGTO director Maria Helena de Senna Fernandes (pictured, centre) said she was optimistic that the bridge – said to be one of the longest sea-crossing structures in the world – can bring in more visitors and more goods to support the city’s economy in the long term.

“The bridge in itself is a tourist attraction… now it is still early to set the tone regarding the impact [on Macau tourism] because the bridge is still a new thing here, which people have been crossing just for the sake of trying… It will take more time – at least a month more… for us to see the actual impact that the bridge can bring,” Ms Senna Fernandes said in her comments to the audience at a conference.

The HKZM Bridge, which spans 55 kilometres (34 miles), was opened to traffic on October 24.

Ms Fernandes also spoke during the MGS Entertainment Show conference about how integrated resorts in Macau could help boost tourism in the Guangdong-Hong Kong-Macau Greater Bay Area. The latter is an initiative of the Chinese central government designed better to link the mainland province and its neighbouring Special Administrative Regions in terms of infrastructure, business and people.

Ms Fernandes noted: “When we look at the first ten something days since the opening of the HKZM Bridge, the mainlander Chinese travellers were not the majority [of Macau-bound] visitors travelling here via the bridge: it was the Hong Kong travellers that far exceeded the other visitor markets.”

The official however did not give the detailed statistics on who came to Macau via the HKZM Bridge.

Currently, the Macau boundary crossing services for passengers travelling between Macau and Hong Kong via the bride are open 24 hours a day. For travellers between Macau and Zhuhai is only open from 8am to 10pm.

Melco Resorts’ Ms Ma shared the MGTO director’s bullish views on the boost brought upon by the HKZM Bridge connectivity to Macau’s visitor volume in the long run.

“In general we anticipate that [the HKZM Bridge] will bring traffic to our properties – both City of Dreams [Macau] and Studio City. And both properties have actually seen obviously increasing traffic…which could be brought by the mix of the [HKZM] bridge connectivity and the city’s events,” said Ms Ma.

At a separate event – on Tuesday – Yu Lie, deputy director of Hong Kong-Zhuhai-Macau Bridge Authority, told local media he believed the governments of Guangdong, Hong Kong and Macau would work to optimise traffic flows on the bridge, namely by increasing the number of people and vehicles allowed to use it. The current special quota system defining what vehicles from mainland China can travel to Hong Kong or Macau via the bridge, would likely stay, but be widened, said Mr Yu.

Macau’s Court of Final Appeal announced on Monday sentences in relation to a total of nine cases concerning debt claims involving junket operators based at local casinos. In all the cases, the... END_OF_DOCUMENT_TOKEN_TO_BE_REPLACED