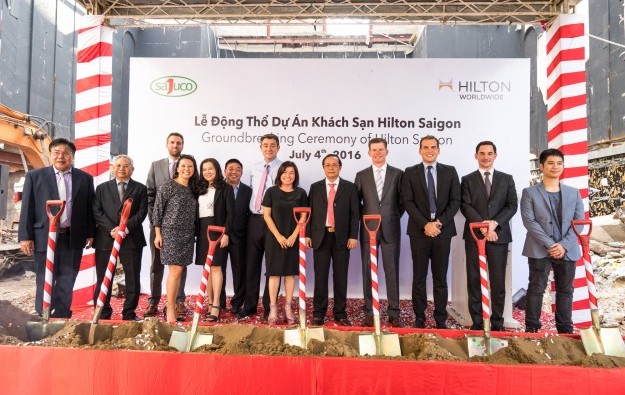 The developer of a casino hotel project in Vietnam’s Ho Chi Minh City has secured a deal with Hilton Worldwide Holdings Inc for the management of the hotel segment of the property.

According to an announcement by Hilton Worldwide, the property – to be named Hilton Saigon – is located in downtown Ho Chi Minh City and will open in the fourth quarter of 2019.

Ho Chi Minh City is the main city in the south of Vietnam.

The release included no details about the casino, namely how many gaming tables and electronic gaming machines it might contain.

Vietnamese firm Saigon Cuu Long Corp is developing the project, stated Hilton’s release. According to media reports, Saigon Cuu Long and a local partner plan to invest around US$100 million in the scheme. A ground breaking ceremony for Hilton Saigon was held on Monday (pictured).

“We have chosen to partner [with] Hilton Worldwide because of its sterling reputation and deep hotel management expertise,” the release quoted Nguyen Van Kham, chairman of Saigon Cuu Long, as saying.

“And given the strength of the Hilton brand, we are confident that Hilton Saigon will be the hotel of choice for Ho Chi Minh City’s growing numbers of visitors,” he added.

Hilton Saigon will have up to 350 rooms and 1,488 square metres (16,000 sq feet) of meeting space, including an 820-square metre ballroom. Recreational facilities will include a casino, a spa, a gym and an outdoor swimming pool. It will also feature food and beverage outlets.

“Ho Chi Minh City, the economic centre of Vietnam, is a gateway destination for leisure and business travellers, and we are thrilled to partner with Saigon Cuu Long to develop Hilton Saigon,” Guy Phillips, Hilton Worldwide’s senior vice president of development for Asia and Australasia, said in a statement.

In early June, it was reported that a proposed entertainment project – in a new urban area called Thu Thiem, in District 2 in Ho Chi Minh City – had completed preparatory work including capital arrangement and detailed drawings. But it was unclear from media reports whether the scheme – which involves some well-known names from the gaming sector – would include casino facilities.

Vietnam has a population of around 92.5 million. The country has several casinos, but authorities prohibit Vietnamese punters from gambling at home, unless they hold a foreign passport. However, a draft decree – which if enacted, would for the first time allow Vietnamese citizens resident in the country to gamble in domestic casinos – has recently been submitted to the country’s government after seven years of discussion, reported late last month the Vietnam Investment Review.

Allowing locals to engage in casino gambling – even if under restricted conditions – is likely to boost the interest of foreign investors in the country’s casino market, according to several analysts.

China has moved one step closer towards reopening, by relaxing some its Covid-19 control measures, with most infected people now able to quarantine at home rather than in state-sanctioned... END_OF_DOCUMENT_TOKEN_TO_BE_REPLACED