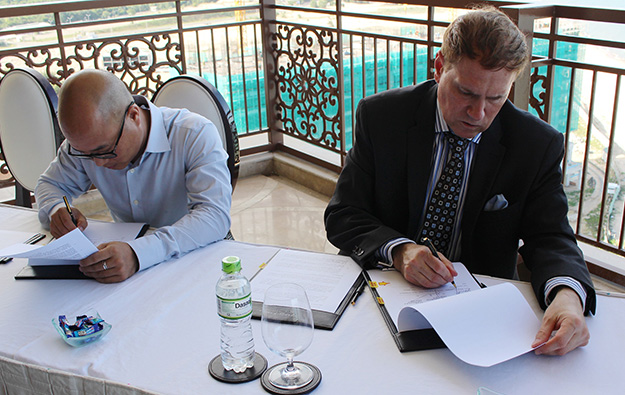 The promoter of a beachside Vietnam casino resort and real estate project called the Ho Tram Strip has signed a deal with a Vietnamese utility to develop a natural gas-fuelled power plant at the site.

The aim is for the Ho Tram Strip to “move to cleaner, greener and more efficient power within the next 15 months,” Ho Tram Project Co Ltd said in a press release.

A memorandum of understanding was signed between the firm and PetroVietnam Low Pressure Gas Distribution Joint Stock Co on June 29 (pictured).

“The US$63 million (net present value) investment will be deployed on a BOO (build-own-operate) model, which will see a power station built within the existing central plant building on the company’s 164-hectare [405.3-acre] site” at Ho Tram, stated the release.

“This pioneering move sees us invest in a natural gas-fuelled plant that will emit less than half of the carbon dioxide and significantly less harmful particulates and carbon monoxide than coal-powered systems,” the executive chairman of Ho Tram Project Co, Michael Kelly, said in a statement included in the release.

He added: “Our 15-year agreement will provide cleaner energy for our 1,100 room The Grand and Beach Club resorts, supply all of the requirements for The Bluffs golf course including its Gallery Villas, and in future can be expanded to include the newly announced Kahuna condotel, and future facilities.”

Ho Tram Project Co said in a June release that the Kahuna Ho Tram Strip – described as a 244-unit development to the north of the casino venue’s hotel tower – was likely to break ground in the fourth quarter this year.

Construction of the power plant is expected to commence later this year. The facility is projected to start operations in late 2018, according to the firm’s latest release.

The document added that, “to date, Ho Tram Project Co’s parent company Asian Coast Development Ltd has current and forward-deployed over US$1.1 billion in Vietnam.”

Current construction includes a 559-room second tower for The Grand – dubbed The Beach Club – which the promoter says is designed further to expand the entertainment amenities at the resort and is likely to open in October 2018.

“The company is also well into the approval processes for the development of a charter airport” on a site near the Ho Tram Strip, the release stated.