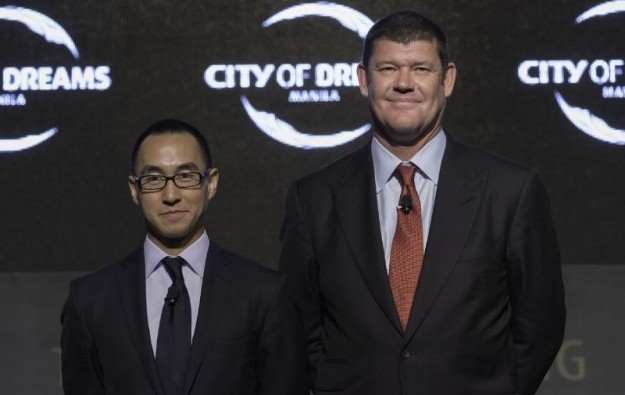 The deal represents approximately 13.4 percent of Melco Crown’s outstanding shares. Upon completion, Melco International will own a 51.3-percent stake in Melco Crown, while Crown Resorts’ shareholding in the latter company will be reduced to 14.0 percent.

The aggregate purchase price is approximately US$1.2 billion, subject to upward adjustments for interest if closing occurs after March 1, 2017, Melco International said in a release. The acquisition of the shares will be made via Melco Leisure and Entertainment Group Ltd.

Following the shareholding changes, Melco International will increase its nominees on the board of Melco Crown from three to four, while the number of Crown Resorts nominees will decrease from two to one. The number of independent directors will remain at four.

James Packer (pictured right), a Crown Resorts appointed director and Melco Crown’s deputy chairman, will resign with effect from Thursday (December 15). In a separate filing, Melco Crown said it expected to appoint “in due course” a replacement, nominated by Melco International.

Mr Packer had already resigned as co-chairman of Melco Crown in May this year, following an earlier deal that saw Crown Resorts reduce its stake in Melco Crown, with Melco International gaining control over the latter.

Under the agreement announced on Thursday, Melco International will pay a deposit of US$100 million into an escrow account controlled by Crown Resorts. Melco International additionally said it obtained a financing commitment in the amount of US$1.2 billion from the Macau and Hong Kong branches of the Industrial and Commercial Bank of China (ICBC).

The deal still needs regulatory approval but is expected to be completed in the first quarter of 2017, said Melco International.

He added: “The acquisition evidences my positive outlook on Macau’s long term prospect and also my faith in the strength and quality of Melco Crown. Taking a majority ownership in Melco Crown will enable both Melco International and Melco Crown to effectively capture growth opportunities in Macau, Asia and around the world.”

In a filing to the Australian Securities Exchange, Crown Resorts said it would be using the proceeds from the sale of its Melco Crown shares to reduce net debt by approximately AUD800 million (US$592 million). The proceeds will also be used to fund a “special distribution” of approximately AUD500 million and enable a share buy-back exercise of about AUD300 million, the company added.

The Australian firm said the special distribution would be paid in the second quarter of 2017.

“This distribution of proceeds is for the benefit of all Crown Resorts shareholders and strikes the right balance between debt reduction and the company’s capital management programme,” said Crown Resorts’ chairman, Robert Rankin, in a statement included in the filing.

On Thursday, Crown Resorts also announced that it will no longer pursue the Alon casino and hotel project in Las Vegas, United States. A subsidiary of Crown Resorts had acquired a 34.6-acre (14-hectare) parcel of land in Las Vegas in 2014. The site was formally occupied by the New Frontier casino.

“Following an extensive review of funding alternatives for the Alon project over the last two years, Crown Resorts has determined that it will not proceed with the project at this time,” the Australian company said on Thursday.

“As a result, Crown Resorts and its partners will begin exploring alternatives to optimise the value of their investment in Alon, including an outright sale,” the firm added.

As the result of the sell down in Melco Crown and the decision not to proceed with the Alon project, Crown Resorts said it had abandoned the proposed demerger of the company’s international investments.

“Following completion, Crown Resorts shareholders will be afforded greater transparency in respect of the company’s asset portfolio and have the benefit of additional capital management initiatives,” said Mr Craigie. “These benefits will be available to shareholders on an accelerated basis relative to the time required to undertake a demerger,” he added.

Crown Resorts said in its latest filing that it continued to prepare for the proposed real estate investment trust’s IPO. The IPO plan is likely to include the group’s two hotel properties in Melbourne, Victoria, as well as two in Perth, Western Australia, according to previous filings.

Crown Resorts’ chairman said that the decisions now announced were “strategic and for the long-term”.

“Today’s announcements will maximise value for the benefit of all Crown Resorts shareholders, allowing us to redeploy capital to fund high quality growth projects as well as adopting a number of capital management initiatives,” said Mr Rankin. “Crown Resorts has a strong portfolio of future projects, anchored by Crown Sydney, and including our online and wagering platforms.”

Crown Resorts said in a second filing on Thursday that it was “exploring potential options to monetise part of its residual shareholding” in Melco Crown. Trading in its shares on the Australian Securities Exchange was suspended following a request of the company. Normal trading should resume on Monday or when a new announcement is released to the market, said the firm.