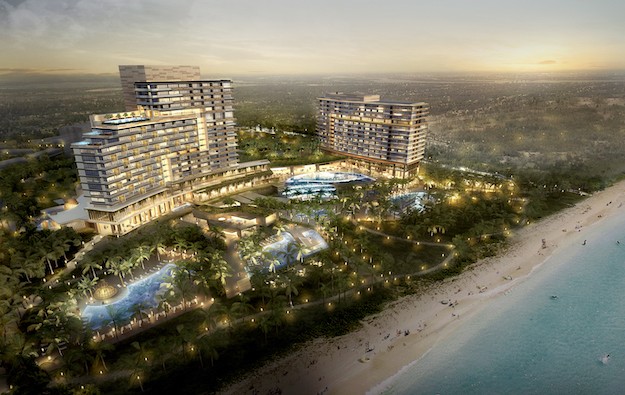 Privately-held Macau junket investor Suncity Group said in a Tuesday press release that Hoiana (pictured in an artist’s rendering), a Vietnam casino resort that launched last year, would see a start this year in its second phase of development, and would target “tourists from Southeast Asia”.

The Suncity brand has been well known for serving high-value casino players from mainland China that wish to gamble in Macau. But in recent years the junket brand has spread its presence to other regulated casino markets.

“The first phase of Hoiana covers an area of over 165 hectares [408 acres], with the second phase project commencing in 2021,” said Suncity Group in its Tuesday announcement.

The release added: “Hoiana will target at bringing in tourists from Southeast Asia as its main source markets in the future. Suncity Group believes that Hoiana will bring significant revenue and sustainable development prospects, and is a demonstration of its determination to gradually evolve into an integrated resort operator and actively expand its resort management business.”

Under a change in mainland China criminal law – with effect from March 1 – anyone who “organises” mainland Chinese for the purpose of overseas gambling will be deemed to have committed a criminal act.

In the same release, Suncity Group stated the brand was “expanding into East Asia to further target Japanese and Korean travellers,” with plans to develop non-gaming resorts “in Miyako Island, Okinawa and Niseko in Hokkaido in Japan, with construction to begin in 2021”.

The brand also reiterated that what it termed the “Westside City integrated resort” at Entertainment City in Manila, in the Philippines, was “set to open its doors before 2023”. The Suncity brand has an investment in that scheme, via Suncity Group Holdings’ interest in Suntrust Home Developers Inc.

Suncity Group stated in its Tuesday update that Tigre de Cristal, a Russian casino resort in which Suncity Group Holdings has an interest, would “focus on developing local Russian clientele, while introducing Japanese and Korean travellers to the resort as the target source market”. Suncity Group Holdings is the controlling shareholder in that resort’s promoter, Hong Kong-listed Summit Ascent Holdings Ltd.

Macau casino operator MGM China Holdings Ltd had a “record” market share in January, and its venues were the “highest-earning businesses” in the portfolio of the majority owner MGM Resorts... END_OF_DOCUMENT_TOKEN_TO_BE_REPLACED