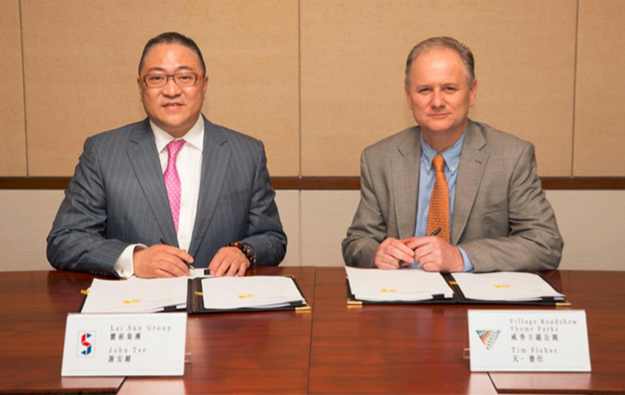 A new Hollywood film-themed amusement park on Hengqin Island next door to Macau is scheduled to open by the end of 2018, the promoter announced in a statement.

The new park – called “Novotown” – “is set to open its doors to the public by the end of 2018,” promoter Lai Sun Group announced in a press release issued last week. The company expects the project to attract more than 5 million visitors in the first year of operation.

The park – located five minutes by road from the border between Macau and mainland China’s Hengqin – is being developed by Zhuhai Hengqin Laisun Creative Culture City Co Ltd. Lai Fung Holdings Ltd owns 80 percent of the firm, while eSun Holdings Ltd controls the remaining 20 percent. Both firms are members of the Lai Sun Group.

Hong Kong-listed eSun Holdings once had an interest in Macau’s Studio City casino project, via an entity called East Asia Satellite Television Ltd. In June 2011, Melco Crown paid US$360 million to take over leadership of the Studio City casino resort scheme. The project had lain with its foundations part built since 2007 after the original set of investors could not all agree on the funding.

Lionsgate is a major Hollywood film and entertainment company that owns a number of film franchises including “The Hunger Games”, “The Divergent” and “Now You See Me”. The second instalment of the “Now You See Me” series – released earlier this year – was partially shot in Macau.

Village Roadshow Theme Parks – a subsidiary of Village Roadshow Ltd – operates themed attractions in Australia and North America. It is also involved in the development of China’s first Wet ‘n’ Wild Water Park, under construction in Haikou, on Hainan Island.

The mainland Chinese authorities have transformed Hengqin – previously a rural and sparsely populated island – as part of the special economic zone of Zhuhai. In just a few years Hengqin has developed commercial, educational and tourist facilities designed to integrate the economies of Macau and Zhuhai. Hengqin is linked by bridge to Cotai, a strip of multibillion U.S. dollar gaming resorts that is Macau’s answer to the Las Vegas Strip.

Macau casino operators, including MGM China Holdings Ltd and Galaxy Entertainment Group Ltd, have shown interest in investing in Hengqin. MGM China said in 2014 Chinese authorities were considering whether to give permission for the firm to invest in a non-gaming project in Hengqin.

Galaxy Entertainment has already signed a framework agreement for a RMB10-billion (US$1.50-billion) non-gaming project on a 2.7-square-kilometres (1.0 sq miles) parcel of land on Hengqin. The firm has plans to build a low rise, low density resort there, according to filings to the Hong Kong Stock Exchange.

A committee of the Thai National Assembly looking at the issue of casino resorts for that nation has suggested it could be viable to have five, spread across the country, as localised drivers of... END_OF_DOCUMENT_TOKEN_TO_BE_REPLACED