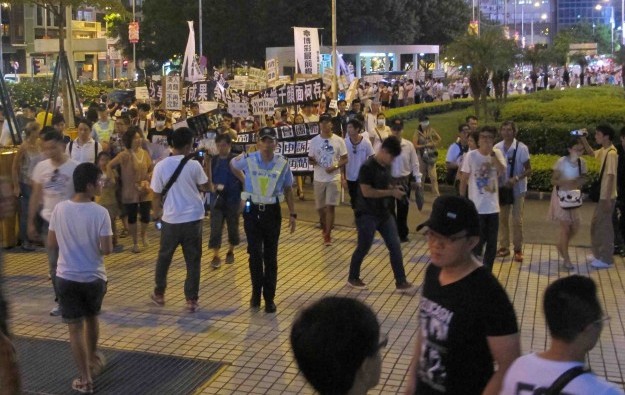 Demands for better working conditions and higher salaries drew thousands of casino workers into the streets of Macau on Monday in a new march to express their dissatisfaction with their employers.

The Forefront of the Macao Gaming, which has organised several protests since July, estimates that about 7,000 people took part in the demonstration, although fewer people were present at the end of the protest. Police estimated around 1,400 people participated in the march. Some 120 police officers were on patrol to keep order.

The march took protesters past the Sands Macao casino hotel, Galaxy Entertainment’s StarWorld Hotel, Wynn Macau and SJM Holdings’ Grand Lisboa. Melco Crown Entertainment Ltd does not have any casino on the Macau peninsula, where the protest took place, and the demonstration didn’t pass the property owned by MGM China Holdings Ltd as police denied the association’s request due to traffic conditions.

The two-hour protest ended in front of the government headquarters, where the labour union delivered a petition addressed to Macau’s Chief Executive Fernando Chui Sai On.

The labour activist group is calling for a 10-percent salary increase across the casino industry to non-managerial positions, especially for dealers, said Clooe Chao, secretary general of the association.

Workers are also demanding the continuity of the “locals only” policy for dealer positions, alongside with changes in the pay and promotion policies for casino staff. They also want the government to set stricter rules for smoking inside casinos, Ms Chao added.

Legislator Ng Kuok Cheong, from the outspoken New Macau Association, told local media the workers’ demands were reasonable due to the rapid growth of the gaming industry in recent years. Mr Ng however said he does not expect operators to increase salaries in the short term.

The city’s Human Resources Office on Friday stressed there are no plans to open dealer positions to migrant workers.

Thousands of new jobs will be created with the opening of several new casino projects in Cotai between 2015 and 2017 – most of those for dealers. Some gaming operators, including Galaxy Entertainment and Melco Crown, have said they will each need to hire about 8,000 workers for their new properties.

There were 25,727 dealers in the city’s casinos as of June 30, according to government data released on Monday. Dealers accounted for 45.4 percent of all employees in the gaming industry, the figures showed.

The average monthly earnings for dealers at Macau casinos increased by 4.8 percent year-on-year to MOP17,530 (US$2,196) at the end of June.

Macau’s unemployment rate stood at 1.7 percent as of June 30. The rapidly expanding casino industry coupled with hiring limitations for migrant workers has resulted in a small labour pool, which a few analysts say may give workers significant bargaining power and drag on casino operators’ margins.

Hong Kong-based analyst at Deutsche Bank Karen Tang said earlier this month that casinos’ labour costs might rise between “10 percent to 15 percent per annum in 2014-17”.

Casino operators in Macau have increased salaries this year and launched other benefits schemes, which they say are competitive in the local market.

Galaxy Entertainment’s deputy chairman Francis Lui Yiu Tung said at a press conference last week that rising labour costs could cut the company’s profit margin by 1 percent to 1.5 percent. Las Vegas Sands Corp, the parent company of Sands China, said in July that a “14th month” special bonus for non-management employees in Macau had had an impact on the company’s second quarter earnings.

Macau recorded 69,279 visitor arrivals on the sixth day of the Chinese New Year (CNY) holiday period, showed official data. The city welcomed about 384,600 visitors in the first six days of the... END_OF_DOCUMENT_TOKEN_TO_BE_REPLACED