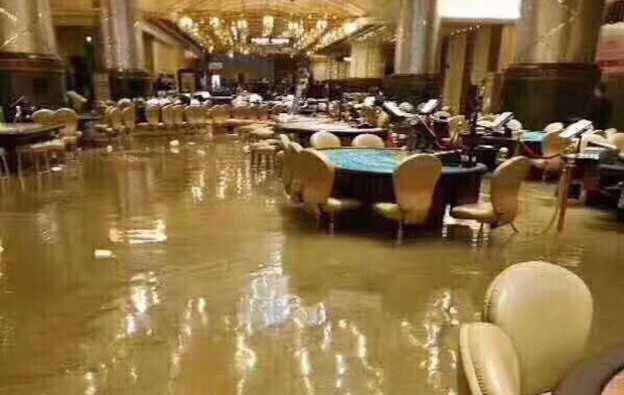 A huge tropical storm on Wednesday – with speeds of more than 200 kilometres per hour (124 mph) according to the local weather bureau – brought damage to some Macau casino resorts as well as flooding in some districts.

This was the scene (pictured) at around noon in the ground floor gaming area at the Ponte 16 resort, which operates in the Inner Harbour district – an area of the city most prone to storm floods – under the gaming licence of SJM Holdings Ltd.

Tropical Cyclone Warning Signal No.10 – an extremely rare event – was raised just before noon local time for Typhoon Hato. The No.8 Signal is enough to trigger the cancellation of road, air and ferry transport. Typhoon Hato was the strongest recorded storm in Macao for 53 years, said the city’s government.

According to local media reports, at least eight people died in Macau on Wednesday, and some 150 people were injured as a result of the conditions.

As of Thursday morning, the scale of the storm was still affecting casino resort operations and public transport. Some casino properties on Cotai still had limited water supply, but electricity had been restored by Wednesday evening. Some casino hotels on the Macau peninsula still had limited power supply on Thursday morning, according to media reports.

Several of these properties were not accepting new customers and were making special arrangements to accommodate existing guests, stated news reports.

The Macau government said on Wednesday evening that it was striving to restore water and electricity supplies across the city as quickly as possible.

Public transport in Macau was still affected on Thursday morning, with a reduced number of buses in operation, according to statements from the city’s public bus companies. Several roads were still blocked by trees or debris, creating traffic jams in a number of places around Macau.

The city’s border crossings with mainland China had resumed normal operations on Thursday morning, after being temporarily closed the day before due to power outages.

Ferry services between Macau and Hong Kong were resumed on Thursday morning, although with a limited number of sailings available. TurboJet, one of the companies operating between the two cities, said in a statement that it resumed limited sailings at 7am. Sailings between the Taipa ferry terminal and Hong Kong were still suspended, said TurboJet. Another ferry operator, Cotai Water Jet, said it would resume operations from the Taipa ferry terminal at 10am.

The operator of Macau International Airport said in a statement that the facility was “gradually resuming operations”. All flights had been grounded on Wednesday due to the severe weather conditions.

In Hong Kong, more than 450 flights were cancelled on Wednesday, and the stock exchange suspended trading for the day, reported Reuters.

Photographs circulating on social media showed disruption at several Macau casino resorts, including damage at the entrance to the Studio City property operated by Melco Resorts and Entertainment Ltd on Cotai. At City of Dreams, another Melco Resorts venue, a number of windows appeared to have been damaged. At Galaxy Macau, the flagship Cotai resort of Galaxy Entertainment Group Ltd, an image shared via social media showed what appeared to be debris from trees strewn across the pool areas on the podium of the property.

Melco Resorts said in a statement supplied to GGRAsia on Wednesday night: “Our properties have suffered minimal external damage which will be repaired over the next few days. City of Dreams and Studio City remain fully operational. Altira has suffered from some power shortages, so we have decided to take pre-emptive measures by relocating guests to our Cotai properties.”

The statement from Chimmy Leung, the firm’s executive director for corporate communications, added: “We thank our colleagues for the extraordinary efforts they have made to accommodate our guests and ensure their safety and comfort.”​

Most private properties lost electric power at around noon on Wednesday, and the water supply was cut in some areas with effect from the early afternoon. Local media reported that Macau – which imports most of its electricity from the mainland – had been affected by the failure of a cable transmitting power from neighbouring Zhuhai.

The city’s casino resorts typically have backup generators to supply power but some of the venues were also reportedly affected by the power outage. In some parts of the city, power had been restored by 7pm.

Sands China Ltd said in a statement to GGRAsia that the firm’s properties were affected by a power and water outage on Wednesday night. “Although backup generators functioned accordingly as designed, operations and customer service were affected. We are working towards resuming normal operations,” the company said. It did not mention any disruption to its casino operations.

“Public safety and security are a top priority for Sands China. We consistently endeavour to safeguard the comfort and safety of our guests even under the most critical circumstances,” the company added.

A note issued by brokerage Union Gaming Securities Asia Ltd on Wednesday evening, stated: “We think some [casino operators] were relying on backup generators for power, so the duration of the power outages could become an issue for certain casinos should generators begin to run out of fuel and only essential functions are kept online.”

Analyst Grant Govertsen added: “Following today’s typhoon, we would expect the GGR [gross gaming revenue] growth rate [for August] to take a couple of hundred basis point hit, which could easily become notably worse should power supply issues remain overnight and into the next day.”

Japanese brokerage Nomura said in a Wednesday note – assuming a likely two-day disruption to tourism businesses in Macau as reported in at least one media outlet: “Our analysis suggests the potential negative impact to monthly GGR growth could be approximately 600 to 700 basis points, or year-over-year growth of 19 percent versus our prior estimate of approximately 25 percent.”

A spokesperson for the local casino regulator, the Gaming Inspection and Coordination Bureau – also known by its Portuguese-language acronym DICJ – confirmed to GGRAsia by telephone on Wednesday evening that the bureau had asked the city’s six casino operators to suspend gaming business at any venues that had suffered a power outage.

Buddy Lam Chi Seng, assistant senior vice president of public relations for Galaxy Entertainment, said in a prepared statement issued on Wednesday, and which did not mention whether there had been any disruption to gaming business: “Today’s typoon Signal No.10 has affected much of Macau at different levels. Galaxy Entertainment Group has stayed in close communication with relevant parties and departments to ensure the safety of guests and team members. Meanwhile, an emergency response task force was formed at noon. Under safe conditions, team members of related departments are now repairing all affected facilities.”

The city’s telecommunications were also affected by the storm and there were clear signs around the city of structural damage to trees and buildings. A black storm surge warning was in place from the weather bureau until 3.30pm on Wednesday. By 6.30pm the storm warning had been downgraded to a No.3 signal and all storm warning signals were lowered by 9.30pm

Macau recorded 965 “gaming-related” crimes in full-year 2022, down 29.7 percent on the 1,372 identified in the previous year, according to the latest statistics published on Tuesday by... END_OF_DOCUMENT_TOKEN_TO_BE_REPLACED