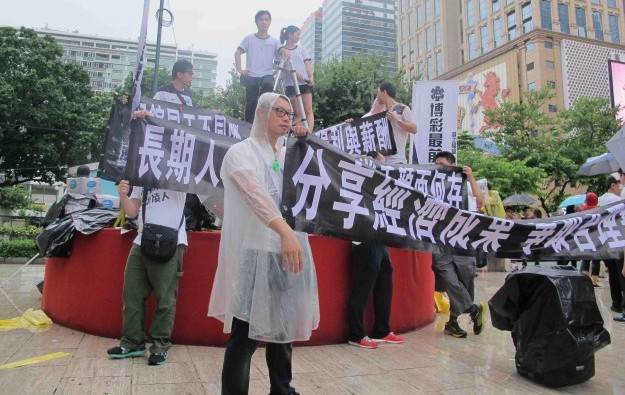 Hundreds of protesters targeted Macau casino operator SJM Holdings Ltd on Tuesday demanding higher pay and better promotion policies. The demonstration was called by the Forefront of the Macao Gaming, an association that has organised similar protests against other Macau gaming operators over the last month.

The labour group estimated that about 1,000 people took part in Tuesday’s protest, Cloee Chao, a representative of the association, told GGRAsia. The police estimates that about 400 people attended the protest, but it was not clear if all of the protesters were SJM Holdings’ employees.

Demonstrators gathered at the Friendship Square, next to the Grand Lisboa casino hotel, SJM Holdings’ flagship property. A crowd several hundred strong then marched around the Grand Lisboa, where there were more speeches.

The labour group said that SJM Holdings failed to reply to the demands they made in a petition delivered to the company on August 14. The association had demanded a salary increase of about 10 percent across the board for casino floor staff. It also called for better promotion policies for casino employees.

The labour group is planning to stage a new demonstration against SJM Holdings on Saturday, as it says the bad weather may have deterred a stronger turnout on Tuesday. “We are still considering that possibility,” Ms Chao added.

The Forefront of Macao Gaming is also planning a new protest for the coming week, likely on August 25, which will not target a specific operator but will call for better pay and promotion policies in Macau’s overall casino industry.

SOFTSWISS Jackpot Aggregator is cooperating with Curaçao-licensed Spinago to launch the latter’s worldwide jackpot campaign for the online gaming sector. The information was given by SOFTSWISS, a... END_OF_DOCUMENT_TOKEN_TO_BE_REPLACED