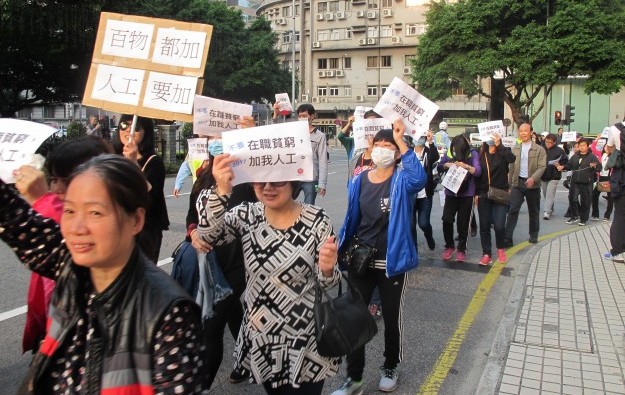 Macau gaming workers held a demonstration (pictured) on Monday calling for a 5 percent-pay hike for the city’s casino workers for 2017.

The city’s Public Security Police estimated 200 people took part. Cloee Chao, described as president of activist group Professional for Gaming of New Macau, the body that organised the rally, said there were about 300 marchers.

“We’re calling for a salary hike for not only the table game workers, but also the rest of the casino employees,” Ms Chao told media after the demonstration. Most members of her group are table game dealers and supervisors.

In November the activist led her group to deliver a petition to the Macau government on the same topic. She told GGRAsia at the time that the group wanted a 5 percent-pay hike in order to mitigate the effect of local inflation.

For the 12 months ended November 2016, the average composite consumer price index in Macau increased by 2.56 percent from the previous period, according to data released by the city’s Statistics and Census Service.

“We are demonstrating at this time because this month is when the gaming companies conclude their earnings for the whole [prior calendar] year. And usually, if they do have any plan to raise their salaries, they would announce it around the time of Chinese New Year,” Ms Chao told local media.

She said the reason her group was demonstrating is that it wanted to call on the government to urge the city’s casino operators to award their staff a pay rise for this year.

“We’ll collect signatures from our gaming worker members to back the pay hike call again if we still do not hear any news about it after Chinese New Year [this month]. We’ll even initiate a bigger action,” said Ms Chao.

“What we mean by this bigger action is that we might express our call via demonstrating at the casinos here,” she added.

Another main demand from the Monday demonstration – a demand backed by Macau legislators Au Kam San and Antonio Ng Kuok Cheong – was the introduction of a law to regulate trade union activity.

Ms Chao explained that this was in order to make sure that workers have the right tools to negotiate with their employers.

Macau’s Basic Law entitles Macau people to the freedom to form and join trade unions, and to withdraw their labour in the event of dispute with employers. Currently there is no enabling legislation that allows trade unions to represent workers legally or to call strikes.

The Macau Gaming Enterprises Staff’s Association – affiliated to the influential Macau Federation of Trade Unions – has also called for a pay hike for the city’s casino workers for 2017. Director general Choi Kam Fu told media on Monday that his group was proposing a pay rise of between “5 percent to 7 percent” for casino employees.

Mr Choi’s comments were made during a separate event held by the Federation of Trade Unions. His group did not take part in Monday’s rally.

“As the gaming industry has stabilised, we think there are conditions for casinos to adjust [salaries of workers] to cover inflation,” Mr Choi said.

There was consecutive year-on-year positive growth in Macau monthly gross gaming revenue in the final five months of 2016 confirmed the data for December and full-year 2016 released earlier this month by the city’s gaming regulator.

Paradise Co Ltd, an operator of foreigner-only casinos in South Korea, reported casino revenue of nearly KRW48.65 billion (US$39.8 million) for January 2023, according to a Thursday filing to the... END_OF_DOCUMENT_TOKEN_TO_BE_REPLACED