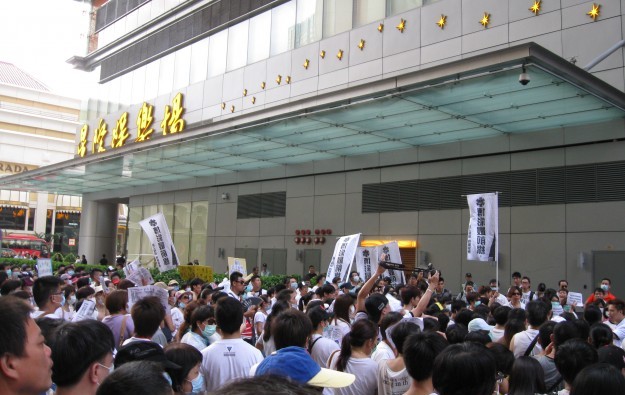 Galaxy Entertainment Group Ltd became the second Macau casino operator targeted by ‘people power’ in fewer than two weeks after hundreds gathered outside the firm’s StarWorld Hotel (pictured) on Macau peninsula for more than an hour, reportedly to protest about pay and conditions in the company’s casinos.

Protestors had initially hoped to picket the front of the casino-hotel but were directed to a road at the back of the building. There a number of protestors briefly sat down in the road, but they were not challenged or moved by the police. As the crowds gathered the road had to be shut to through-traffic.

It had earlier seemed that Galaxy Entertainment would dodge the direct attentions of Forefront of the Macao Gaming after the local labour grouping  said that it had cancelled an earlier planned march also due on Tuesday outside Galaxy Macau on Cotai. The group said it was “not convenient” to use that location due to the current building work at Galaxy Macau, where an approximately US$2.9 billion extension is being created.

Galaxy Entertainment’s market rival Sands China Ltd was subjected to a demonstration organised by Forefront of the Macao Gaming outside the Venetian Macao on July 24 by up to 1,500 people, although police estimates put the number there at 900.

Galaxy Entertainment had announced on Monday that it was offering staff at senior manager level and below, company shares and pay bonuses – albeit with loyalty conditions potentially tying workers to the firm until the end of 2017.

At first it seemed that the timing of Monday’s announcement would be fortuitous. A spokesman for Tuesday’s relocated gathering, starting at Golden Lotus Square on Macau peninsula, estimated only 300 people initially attended, rather than the 500 it had expected – although more people swelled the crowd an hour into the event, as association members made a series of speeches.

“We think there are about 300 people, and we expected 500,” Kelvin Leong, a spokesman for Forefront of the Macao Gaming told GGRAsia.

“I think that’s because some people were happy with the offer that Galaxy [Entertainment] made,” he added.

But Mr Leong added that dealers, a key component of the casino floor workforce – in both numbers and revenue generation – were still not happy with Galaxy Entertainment.

He said: “The dealers are still not satisfied. Especially the ones at StarWorld,” though he didn’t explain what the issue was with that property, Galaxy Entertainment’s first purpose-built venue, opened in 2006.

Earlier on Tuesday, Ieong Man Teng, president of the labour group, had told journalists: “It was not convenient” to hold today’s event at Galaxy Macau, because of the construction work there.

The group instead decided to target its ire at Galaxy Entertainment’s City Clubs Rio and Waldo on Macau peninsula, close to Golden Lotus Square. According to the company’s 2013 annual report, the cost of administering and operating the City Clubs is not borne by the group, but by other partners. The company confirmed in an email to GGRAsia that the City Clubs have separate policies on salaries and bonuses from the parent firm.

A crowd several hundred strong then marched from Golden Lotus Square to StarWorld casino hotel, where there were more speeches, with the crowd staying for about an hour.

Sands China will face a further action on Thursday outside Sands Macao on Macau peninsula.

Mr Ieong described the planned Thursday event as a “gathering” and not a protest, but it marks further attention for Sands China, which has already announced a comprehensive policy – effective from August 1 – for dealing with staff promotions.

Sands China on July 3 said it would pay its staff “a special award” bonus that month. The company is paying the equivalent of one month’s salary to more than 27,000 full time employees at “manager grade and below”.

After Tuesday’s protest at StarWorld, Buddy Lam Chi Seng, vice president of public relations for Galaxy Entertainment, issued a statement on behalf of the company, thanking those of its workers that had “rationally” explained their views direct to the firm, rather than via street protest. It was not clear during Tuesday’s direct action how many of those taking part were Galaxy Entertainment workers.

“While Galaxy Entertainment respects some team members who convey their views through legal external channels, we hope that they can directly express their opinions to respective departments. We believe this will establish a more stable and harmonious relationship across the company,” said Mr Lam.

“Furthermore, we would like to express our heartfelt gratitude to most of our team members who rationally conveyed their views directly to Galaxy Entertainment,” added his statement.

Most of Macau’s casino operators are likely to generate positive free cash flow in the first quarter, given the robust recovery level of mass-market gross gaming revenue (GGR) in January, relative... END_OF_DOCUMENT_TOKEN_TO_BE_REPLACED