Hyatt Regency Hengqin hotel at Novotown to open in Dec 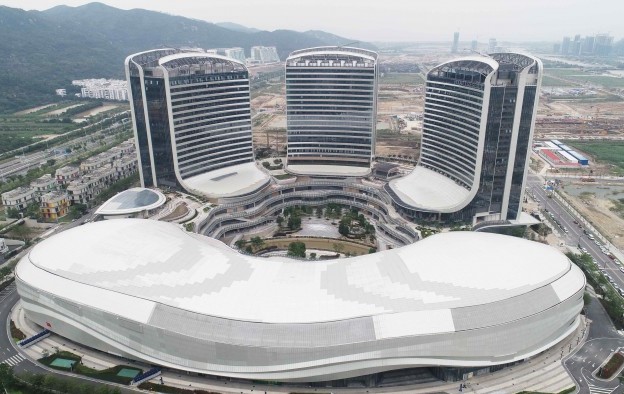 The Hyatt Regency Hengqin, a 493-room hotel that is part of a non-gaming tourism project called Novotown (pictured) on Hengqin island, will “open” during “December”, the overall project’s owner Lai Sun Group announced in a statement on Monday.

The Hong Kong conglomerate noted in the same statement that an official launch of Novotown would take place on December 6.

The Macau government has said it views such Hengqin facilities as complementary to Macau’s casino-resort tourism sector, and would like to promote two-centre holidays taking people to both places.

Hotel nights at five-star hotels in neighbouring Zhuhai prefecture – of which Hengqin is part – are typically cheaper than prices in Macau five-star hotels, according to investment analysts. A check by GGRAsia of the Hyatt Regency Hengqin’s website on Tuesday indicated that the hotel was taking online bookings only for stays from February 1, 2020 onward. A standard nightly rate for a king bed room in the first week of February was listed as CNY770 – about US$109, or MOP881.

A Hong Kong filing on October 22 by Lai Fung Holdings Ltd – a property development arm of Lai Sun Group – said the Hyatt Regency Hengqin would be opening in phases.

Larry Leung, managing director of Novotown was quoted as saying in prepared remarks in the press notice on the Hyatt Regency Hengqin that the property would be a further contribution to the development of “Hengqin International and Tourism Island”.

Lai Sun Group launched in July at Novotown an indoor entertainment zone called Lionsgate Entertainment World, and in September a facility called National Geographic Ultimate Explorer Hengqin, as part of what the company referred to as the first phase of Novotown. That first phase has an overall has a development cost of CNY5.45 billion (US$772 million), according to previous statements of the group.

Lai Fung Holdings noted in its October 22 filing that leaseholders had been found for “approximately 68 percent of the commercial area” of the first phase of Novotown, with “over 50 percent” being shops due to open by the end of this year.

The same filing also noted that Lai Sun Group was finalising with relevant mainland authorities the “master layout plan” for the second phase of Novotown.

That phase is due to include a themed facility called Real Madrid World, under a licensing deal with leading Spanish professional football outfit Real Madrid Club de Fútbol.  No timetable for phase two development has yet been announced.

Phase two is also slated to offer an educational facility for children aged seven to 12 years, called the International Leadership Academy Hengqin, under a cooperation deal with Harrow International (China) Management Services Ltd and ILA Holdings Ltd. That phase of Novotown is also due to have Ducati Experience Centre, under a licensing arrangement with Italian motorcycle maker Ducati Motor Holding SpA.

The Novotown project is located near the Macau-Hengqin boundary checkpoint at the north of Hengqin island. Macau was recently told by the central government it would have responsibility for running that checkpoint.

Elsewhere in Hengqin, some non-gaming attractions such as the Chimelong theme park complex are already running, and more are being planned.