Hybrid tables should be counted as slots: Macau academic 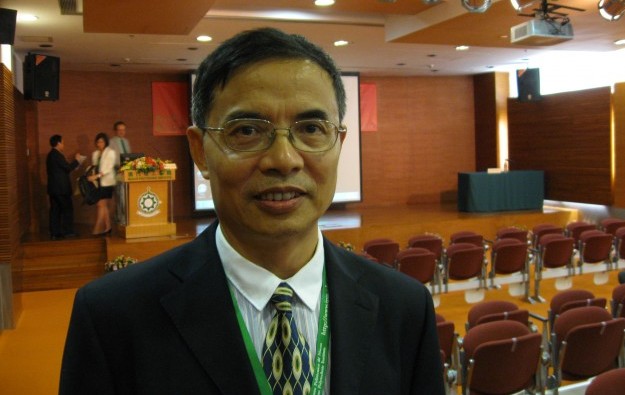 A leading Macau academic said on Wednesday that Macau casino operators might seek to face the challenge of the city’s table cap by using larger tables with more player stations. He also suggested so-called hybrid games using electronic betting serving multiple player stations via a live dealer, should be counted as slot machines.

The latter idea – were it adopted by the government – could have significant implications for how the city’s table cap is implemented.

Professor Zeng Zhonglu (pictured) of the Gaming Teaching and Research Centre at Macao Polytechnic Institute, told GGRAsia: “Maybe the casinos can find some other way, such as [using] bigger tables.”

The government has imposed a cap that seeks to limit the growth of live dealer tables to 3 percent compound annual growth until end-2022 from a base of 5,485 tables recorded by the authorities at the end of the fourth quarter in 2012. The policy coincides with a huge expansion of gaming resorts on Cotai involving billions of U.S. dollars in investment per resort, and a business model that depends on maximising table numbers in order to achieve rapid payback. Seven new such resorts are due to open between 2015 and 2018.

Earlier Mr Zeng, speaking at the International Conference on Gaming, Leisure and Entertainment 2014 held at the institute, said during his keynote speech that Macau currently had 5,750 tables in the market. The official data from the city’s Gaming Inspection and Coordination Bureau (DICJ) show 5,710 tables in the market at the end of the second quarter.

On the sidelines of the event, Mr Zeng told us: “Some reports say that after all the projects are completed, the number of tables [in Macau] will be 80 percent more. That relates to how many the operators have applied for. How many tables the government will approve is another matter. We cannot tell what the reality will be.”

“I think the government will be very careful…So far I didn’t see any changes in the government policy. Also I don’t know how powerful the [local] lobby will be to influence the ability of the casinos to have the tables they want.”

Mr Zeng added that a more “scientific” approach to the tables question would be to count electronic table games with a live dealer as slot machines, rather than as table games as they are at present.

Macau’s DICJ regulates such hybrid products as table games, based on the fact that the game play and game rules follow those of existing traditional table games, official sources have previously told GGRAsia.

According to a report published by Union Gaming Research Macau Ltd in January, the regulator allows between 50 and 60 electronic terminal seats for these hybrid games to count as equal to one traditional table, which typically serves nine players. In other words, the seats for those hybrid tables count as part of the casinos’ table allocations.

But Mr Zeng said on Monday: “For the electronic tables, even the ones with real dealers, according to my opinion they are slot machines. Only the [traditional] table with the real dealer is a table. The other terminals are just slot machines. That in my view is a more scientific approach.”

Union Gaming said in June that it estimated there were at that time around 5,500 seats for the hybrid table games in Macau.

Were the government to adopt Mr Zeng’s suggestion of classifying the hybrid games as slots, it could potentially free an allocation of 110 tables market wide at the 50:1 ratio, or around 92 tables market wide at the 60:1 ratio. Were those numbers added to the market-wide base and then compounded at three percent growth per annum, it would move the market a little nearer to the table aspirations stated by the operators for their new Cotai projects.

“Reopening” of China relative to its current “Covid-zero” policy could start “in spring 2023” based on “three signposts” that could emerge after the 20th National Congress of the... END_OF_DOCUMENT_TOKEN_TO_BE_REPLACED