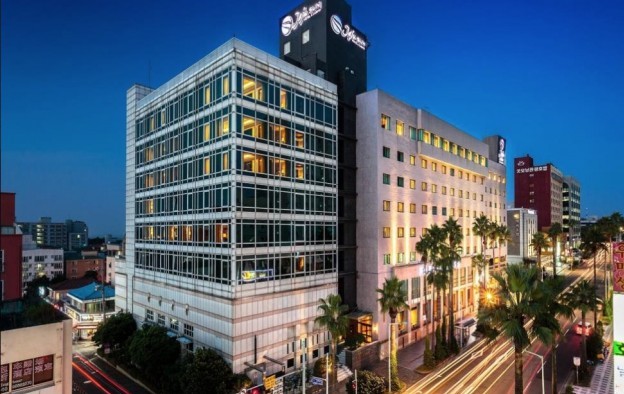 Macau VIP gambling room investor Iao Kun Group Holding Co Ltd is to acquire the Jeju Sun Hotel and Casino (pictured) – on Jeju Island in South Korea – from Bloomberry Resorts Corp. The deal was announced on Thursday in a filing to the Philippine Stock Exchange.

In that filing the companies jointly announced that respective subsidiaries of Bloomberry Resorts and Iao Kun have signed an agreement whereby Solaire Korea Co Ltd will sell its entire 96.23 percent shareholding in Golden and Luxury Co Ltd, the owner and operator of the Jeju Sun property.

The purchase price for the shares and the shareholder’s loan is KRW117.5 billion (US$102.5 million), the parent companies said. The deal is expected to close within 45 days.

The agreement is subject to several conditions, including the satisfactory conclusion of a due diligence process that Iao Kun will conduct. It is also subject to the approval of certain government authorities, according to the filing.

Bloomberry last week said that it was considering selling its Jeju casino hotel. It acquired a majority stake in the venue in April last year.

Jeju Sun posted gross gaming revenue of PHP23.3 million (US$502,000) in the first quarter of 2016, according to Bloomberry. It recorded negative earnings before interest, taxation, depreciation and amortisation of PHP197.7 million for the period.

“We believe Bloomberry has had a difficult experience operating in Korea, which ultimately resulted in this sale agreement,” brokerage Union Gaming Securities Asia Ltd said in a note on Thursday.

Union Gaming said the pending acquisition of the Jeju Sun marks the most “recent example of Macau-centric junkets attempting to transition from being agents to principals – and therefore direct competitors to existing casino operators who are also the patrons of junkets”.

Lam Man Pou, chairman of Iao Kun, said in a press release: “We are excited to be acquiring the Jeju Sun Hotel and Casino in Korea, our first lodging venture, which effectively broadens our strategic focus toward becoming a full-service hospitality company.”

“We believe the acquisition will materially expand our footprint in Asia into the growing Korean market and increasingly popular island of Jeju while allowing us to further diversify and stabilise our revenue streams and cash flows,” he added.

Iao Kun promotes five high roller facilities in Macau casinos, according to its most recent regulatory filings. In May 2015, the firm expanded its casino junket operations to Crown Perth Casino and to Crown Melbourne Casino, in Australia.

Nasdaq-listed Iao Kun reported a net loss of US$3.5 million for the three months ended March 31.

“Iao Kun desires to enter into the Jeju market and is confident that it can attract its Chinese VIP customers to Jeju Island,” said Thursday’s filing by Bloomberry Resorts.

Union Gaming’s analyst Grant Govertsen said the brokerage believes “other junkets are exploring similar acquisition opportunities and/or are looking to create their own greenfield opportunities overseas”.

He added: “We would not only expect Macau’s VIP segment to experience top-line headwinds going forward, but the principal dynamic should also result in bottom-line headwinds for the VIP segments of existing casino operators.”

In Thursday’s filing, Bloomberry said its unit Solaire Korea “intends to focus its effort on the development of its property in Muui and Silmi Islands”.

That was a reference to a casino resort complex Bloomberry plans to build in South Korea. In April 2015, the firm announced that it planned to invest more than US$1 billion in the project. It would include residential towers and a beach resort, as well as gaming, according to the company.

Morgan Stanley Research said in a note on Thursday that Bloomberry might be looking to “develop its landbank at Silmi and Muui Island potentially with other partners, starting early 2017 when the bridge from Incheon to Muui and Silmi Island is completed”.

Spectrum Gaming Group LLC, a specialist consultancy on probity and legal compliance in the regulated casino sector, has issued its “Top Ten Trends To Watch for 2023”, including likely events in... END_OF_DOCUMENT_TOKEN_TO_BE_REPLACED