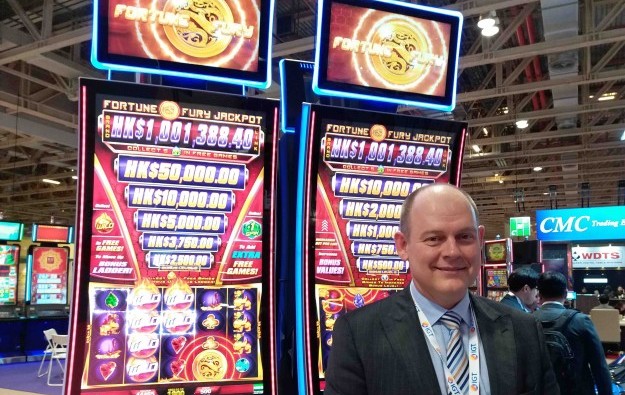 “Our primary strategy, particularly for Asia, is to get back to some core principles in terms of market-attuned products,” Mr Hely told GGRAsia.

He was speaking on Wednesday at IGT’s stand during the second day of the MGS Entertainment Show, a casino industry trade show and conference held in Macau.

Mr Hely added: “That doesn’t mean superficial re-skinning of American math models with Asian themes. It’s about getting back to core math models that we think are going to resonate with players in this part of the world, as far as volatility is concerned and then making sure we have the correct theming around that and everything else.”

Mr Hely returned to IGT on July 1 after working for the pre-merger company for 17 years until 2014.

He said his appointment was “part of a strategy by Walter Bugno” – IGT’s chief executive of international – to “re-empower the regions, back to a model where there is a managing director looking after the Asia-Pacific region”.

“From July we have done a lot of work in terms of recalibrating the region as far as people are concerned and also strategy in terms of products,” Mr Hely added.

Asked whether the intellectual property deal IGT announced in April last year with Hong Kong-listed casino electronic table games maker Paradise Entertainment Ltd under the latter’s LT Game brand would result in new IGT products in Asia-Pacific markets outside Macau, Mr Hely said: “We will see some movement on that in 2018 as far as placements of electronic table games in Asia is concerned.”

He noted regarding IGT’s slot machine offer: “Some of the products we have here [at MGS] represent what we launched in Sydney at the Australasian Gaming Expo in August, particularly our ‘Prize Disk’ family of games and the ‘Hyper Hits’ family of games too,” he explained.

The game mechanic of the Prize Disk series features scrolling prizes above the reels. Its mathematics offer a progressive style of jackpot. The Hyper Hits series is available as a link or as a standalone product; has a choice of denomination set-up and jackpots; and what the manufacturer describes as “frequently occurring” events to maintain the engagement of the players.

Slot machine products that are new for Asia may be approved by early 2018, in likelihood in the first quarter, said Mr Hely.

Among the new products is the CrystalCurve (pictured), a so-called “4k-resolution” slot cabinet with curved screen likely to be released in the first quarter next year for Asia. It will be the platform for the Wild Fury Jackpots video slot range, which has been designed “from the ground up” for Asia Pacific, said IGT.