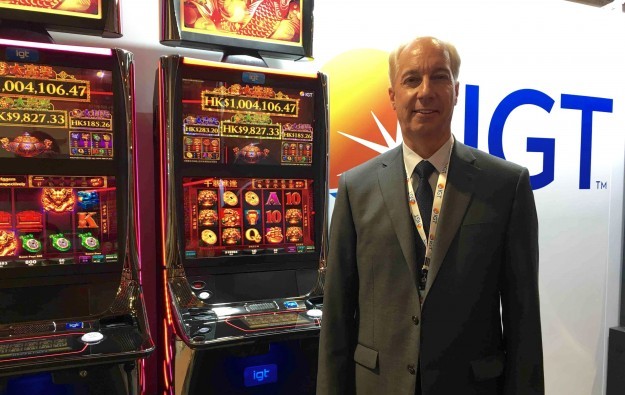 Global gaming supplier International Game Technology Plc (IGT) is currently in discussions with three different casino operators in Asia, one of which is in Macau, regarding the possible launch of a new mobile application that would allow casino patrons to play slots and back-bet on tables in real time via their smartphones. So said IGT’s director of sales for Asia, Mark Michalko (pictured), in comments to GGRAsia.

“It’s a product we believe, as a company, will have tremendous growth potential all across the world, not just in Asia and not just in Las Vegas,” he said on Tuesday, during the first day of the Macao Gaming Show (MGS) 2016, a casino industry trade exhibition and conference.

The mobile application, called PlaySpot, has been launched on a test basis at MGM Resorts International properties in Las Vegas, and the response has been “very positive”, he said.

Conversations with an operator in Macau are still at a very early stage, Mr Michalko said, adding it is likely the product will be launched first elsewhere in Asia, due to different regulatory environments in different jurisdictions. The company is also looking to launch the application in other parts of the world, he said.

PlaySpot acts as “an electronic wallet” and is ‘geo fenced’, meaning the app recognises the physical  location of the player, ensuring it will only work within the confines of the gaming property, Mr Michalko explained. The operator can also choose to limit the area – within the authorised venue – where the application can be used, he added.

The application – which includes a significant number of security features – can also show game result ‘patterns’ – a popular feature with Asian players. The app allows a user to programme his or her mobile phone to provide a notification if a certain game pattern occurs on any table.

“It allows the operators to increase levels of play, and therefore their revenues, without having to increase their expenses,” Mr Michalko said, referring to the fact that casinos would be able to get more people betting on tables without needing to increase the number of tables, and also without slowing down the betting.

The Asia sales director said PlaySpot is a product “for the next generation of players”. He noted that while “it has not been designed exclusively for Millennials,” it is an opportunity for the company to “break through into that market”.

Mr Michalko further stated that besides working on the launch of PlaySpot, IGT hopes to be able to have in 2017 more market-attuned games and to launch “new linked [slot] products,” as it believes Asia, and Macau in particular, are becoming “very much link [slots] markets,” as opposed to standalone games.

“We’re also going to be [launching] electronic table games, probably in the second half of the year,” Mr Michalko added.

IGT acquired the global intellectual property rights for electronic table games (ETGs) produced by Macau-based supplier LT Game Ltd – with the exception of rights in the Macau market. Mr Michalko said that having the global rights to such ETGs – ex-Macau – will enable IGT to develop new versions of the technology.

According to Mr Michalko, IGT has done “reasonably well” in 2016.

The company introduced this year “a few new titles” in Macau but there were some matters related to the city’s regulatory environment that had “slowed things down a little bit,” he said. But the company has also placed a number of machines outside Macau, including in South Korea, and developed its existing business with casino properties in Singapore and in the Philippines, including at Okada Manila – the new venue set to open in December in that country.

Mr Michalko said that although the company is “still primarily focused on Asian-attuned themes” in markets outside Macau, it also expects to bring to Asia “some high performing games that have worked well in other parts of the world”.

In addition to the gaming machines segment of IGT’s business, another “focal point” for the company now and “in the coming years” is the systems segment, he noted.

“A year and half ago we supplied the system that went live at City of Dreams, in Manila: this year, we put our system into Wynn Palace [in Macau]; and we’ve done a lot of advancements and upgrades to add features to some of our other systems here in Macau and elsewhere,” he said.

As for slot machines, IGT has for the last several years focused on products for the Asian market. They consist mainly of “games that have specific math models,” with different levels of jackpots on the linked products, that have been designed for the Asian player, Mr Michalko explained. “In particular, the ones we introduce in Macau are designed for the players that tend to come to this region.”

At MGS 2016, IGT is showing a few new, Asia-focused slot machines to be launched soon in Macau, including Fui Gui Ji Li, Legend of Change and Gong Xi Fa Cai.