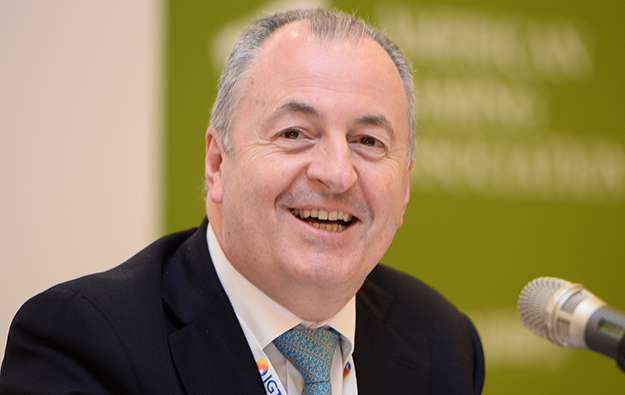 “It’s an area where we see lots of potential… we’re trying to really focus on innovation to meet the requirements of consumers in today’s world,” Mr Bugno told GGRAsia during an interview at Global Gaming Expo (G2E) Asia, a casino industry trade show held in Macau in May.

In Macau, Paradise Entertainment’s brand, LT Game Ltd, will remain the exclusive provider of ETG products that rely on some intellectual property of the parent firm not covered by the April agreement with IGT.

The deal with Hong Kong-listed Paradise Entertainment resulted from the need to “fill the gap” in IGT’s product portfolio, said Mr Bugno. “We were also cognisant of the fact that the ETG segment is a growth market in many jurisdictions around the world.”

Mr Bugno said: “We approached Paradise and asked if there was an interest on their part to sell us the IP [intellectual property] for their products. We would then bring that in-house within IGT, develop the product to the design and standards that we want, and then IGT takes it to market, in all markets around the world, with the caveat being Macau.”

Paradise Entertainment said it estimates such payments will range from 3 percent to 12 percent of IGT’s sales revenue for the licensed products during the 15-year term.

A report in May by brokerage Union Gaming Securities Asia Ltd said that nearly 3,100 ETG seats are likely to be added to casino inventory across key Asia Pacific markets in the next three years. It said that represented a business opportunity for equipment suppliers amounting to approximately US$62 million.

Mr Bugno said the exclusion of the Macau market from IGT’s deal with Paradise Entertainment took into consideration that the latter “is well established” in Macau. “The market is also already established here,” he added.

Mr Bugno said about the decision to uncouple the Macau market from the IP deal IGT made with Paradise Entertainment: “We really saw very little benefit for us and there was no value that we could gain from the placements that are already in the [Macau] marketplace. The rest of the world is ‘virgin territory’ and it was a great opportunity for us.”

Prior to the IP deal, the legacy version of IGT, International Game Technology – a Nevada-based supplier of slot machines – had in 2014 announced a three-year distribution deal with LT Game.

IGT’s International CEO said the firm is confident about what products it will be able to bring to the market, despite “some great competitors” in the ETG segment.

“It’s a segment that is growing and we believe that the reason we took the Paradise product – rather than developing our own – was to accelerate our ability to get to market,” said Mr Bugno.

The executive said IGT could in likelihood have entered the ETG market sooner, but the company is now working to recover lost ground. “Since the merger with GTech we moved fairly fast to get where we are today,” said Mr Bugno.

He was referring to the US$6.4-billion merger with Italy-based lottery equipment specialist GTech SpA, completed in April 2015.

Mr Bugno stated that the new IGT is “pleased with the results” achieved one year after the merger.

He added: “It [the merger] has been relatively seamless, not completely seamless, but everyone seems to be happy with the progress that we’ve made.”

IGT posted higher revenue in the first quarter of 2016 as measured in year-on-year terms, but its net loss still increased, after foreign exchange losses, the firm announced in May.

The development of IGT’s position in Asia is one of the firm’s priorities, Mr Bugno said, adding that the company recognised the fact that to succeed in Asia it needs to develop locally designed products.

“Traditionally we didn’t have that for IGT in this [Asian] market… But if you walk to our stand now [at G2E Asia] you’ll start seeing there is a lot of content that has been designed and developed for this market by people from this market. I think the next 12 months will be a good proof of the progress that we’ve made,” said Mr Bugno.

IGT expects to increase sales in Asia, including in Macau. During the first quarter of 2016, the company sold 5,695 gaming machines worldwide. Of these, 1,744 were shipped to places outside North America, compared to 1,587 units in the prior-year period, according to the firm.

“As the year progresses we think that there will be some increase in volume in this [Macau] marketplace for all manufacturers. We hope to get some of that,” Mr Bugno said.

“Everyone is looking at Asia to continue diversifying their floor. Asian casinos are modern casinos and the [equipment] replacement cycle tends to be a lot faster than some of the casinos of some European countries or some U.S. … markets.”

The executive added that he expects IGT to continue to see very good growth in Latin America and to remain stable in the Europe, Middle East, and Africa (EMEA) segment.

Mr Bugno noted that IGT is also trying to develop further its interactive segment, including the online and mobile social casino business, which in some Asian jurisdictions is still “very constrained by regulations”.

“Of course we are seeing the growth of importance of mobile [gaming] – that is the big mover for online. Its growth rate is significant everywhere around the world,” said Mr Bugno, singling out sports betting and iGaming.

“As countries regulate the playing of slots and table games onto the interactive platforms, there are new opportunities to be explored,” he said.

“That is a positive link to the continued success of the IGT games as more and more people transition from playing solely land-based to playing partly land-based, partly-online, and they like to play titles that they’re familiar with in their preferred casino,” the executive added.

The global gaming supplier showed its OnPremise mobile betting product at G2E Asia. The application utilises embedded technology that the company says enables casino patrons “to play at multiple live tables simultaneously through their smartphone or tablet from any permitted area within a casino”.

Mr Bugno said the company is trying to team with “one or more [casino] operators” in order to take OnPremise to the Macau gaming regulator to see if it can get approval for this market.

“There’s still a lot of work to be done in bringing it [the OnPremise solution] to this market but we think that for Asia – and for baccarat in particular with the concept of back betting – it’s an application that is extremely valuable,” he said.

IGT had already got “incredible feedback” from a number of operators in Asia, including in Cambodia, Malaysia and the Philippines. “They are very keen on taking it on board relatively quickly,” Mr Bugno added.

Macau’s health authorities said on Sunday that they would require all people wishing to enter the city’s casinos not only to have their body temperature measured and to display a... END_OF_DOCUMENT_TOKEN_TO_BE_REPLACED