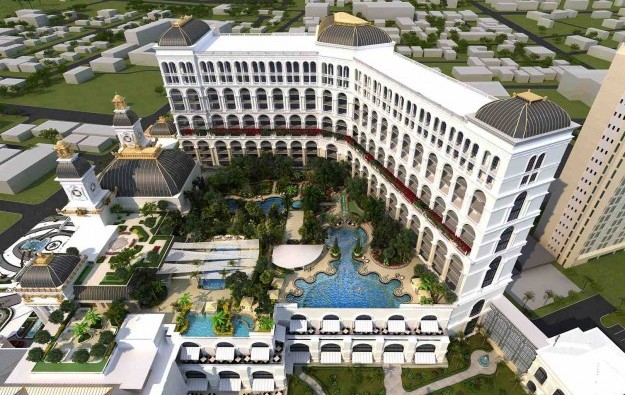 Grand Mariana Casino and Resort (pictured in a rendering) on the Pacific island of Saipan is to offer casino junkets a better deal under the VIP gambling sector’s revenue sharing system than is typically available in Macau.

The fact was confirmed to GGRAsia by executives from the resort’s developer, Hong Kong-listed Imperial Pacific International Holdings Ltd in an interview on the sidelines of the Global Gaming Expo (G2E) Asia 2016 in Macau.

The Marianas Variety newspaper on Saipan had separately reported in early April that the Commonwealth Casino Commission on Saipan – the largest island of the U.S. Commonwealth of the Northern Mariana Islands – had authorised Imperial Pacific to revise what was referred to as the “rebate rate” on its temporary casino’s rolling chip programme to 1.8 percent from 1.3 percent. The approval was immediate with a six-month trial period, reported the media outlet.

Given the roll recently reported at the temporary casino, the Imperial Pacific executives told GGRAsia they do not intend to increase the current 1.3 rebate percentage on the rolling chip programme.

In the Macau VIP gambling market, the incentives offered to junkets and their players to roll chips in VIP rooms are usually characterised as either “rolling chip commission”  – a percentage of roll paid to agents and designed to incentivise play, not to rebate player losses – or “revenue share”.

Rolling chip commission is a steady but small form of income to junkets. Its upside is that it is paid at a steady rate regardless of casino hold rates on baccarat, the Asian VIP gamblers’ game of choice. Rolling chip commission becomes more attractive to junkets when large volumes are wagered. Revenue share can offer bigger rewards to junkets on relatively modest amounts of roll, but can be more volatile, as it is affected by fluctuation in hold rates for baccarat.

VIP play at Imperial Pacific’s “temporary casino” began in November and currently utilises 16 VIP gaming tables. Play is arranged through individual relationships, according to Mr Brown. He added that currently the VIP players at the temporary casino are “100 percent” mainland Chinese customers.

“Right at this moment, we deal with individals. Up until this moment, I grant credit to individual persons: you join our rolling programme, and we pay you 1.3 percent commission, individually. And you [the VIP player] have to pay me one-on-one,” Mr Brown told GGRAsia.

“There are 20 applications [for junket licences] now on file which we are waiting for them [the regulator] to approve,” he added.

Explaining how the current house-based gambling credit system works, Mr Brown told us: “I can give you credit, and you can give monies to five of your friends, as long as I know who’s there gambling. But I’m only dealing with you with your credit.”

He said that if the junket licences are approved, the house would still have “our rolling programme at a 1.3 percent.”

“But as the Grand Mariana opens up at the end of this year – the casino piece – we’ll have true junket rooms: we will allocate to Suncity or to Guangdong [Group] [two of the largest investors in the Macau junket sector] or others. It will be a junket room that will deal with the Suncity company, that we can make a deal with a true Macau-style profit sharing.” he added. But he noted that at this moment, Imperial Pacific has not signed any arrangements with Macau junket firms to provide services at Grand Mariana casino.

Grand Mariana Casino and Resort will consist of about 250 gaming tables, 400 slot machines, clubs, 11 restaurants, several ballrooms, and about four shops; the project will also have 374 suites, according to the Imperial Pacific executives. The hotel block will be opened in the first quarter in 2017, Mr Brown said.

Shen Yan, president of global capital markets at Imperial Pacific, told GGRAsia that the revenue sharing model that will be adopted at Grand Mariana is going to be more “attractive” than in Macau.

“It’s fair to say that it will be more attractive than Macau. The 60-40 split  in Macau is really making [sending] margins of junket guys to nothing. The 40 that they get, after they pay to the customers, especially considering the credit risk they are carrying, they don’t make any money,” Mr Yan said, “That’s why junkets are actually incentivised to go abroad. Saipan, again, we have advantages: we are solo, we are exclusive, and we have lower tax. So those advantages allow us to give back more to our junket guys and to our customers.”

In a filing to the Hong Kong bourse in early May, Imperial Pacific said that VIP gaming operations at its temporary casino in Saipan have reached saturation, half a year after the property started operations. The firm’s US$25-million temporary casino had achieved a monthly VIP table game rolling chip turnover average of US$2.0 billion in the first three months of 2016, representing a 30 percent increase compared to the monthly average of US$1.6 billion achieved in November and December 2015, it said in an April filing; the temporary casino’s unaudited VIP table games rolling chip turnover generated for April was US$3.2 billion.

“It has exceeded our expectation by a little bit. We always have told the market that we believe we could have done on a monthly basis, around US$1.2 billion to US$1.3 billion of rolling. And we started with similar number of US$1.4 billion to US$1.6 billion in November and December. And as the word gets out, and there are more and more people understanding that Saipan has started to have gaming, more people started to show up,” said Mr Yan.

“Then we started to reach US$2 billion [a monthly VIP table game rolling chip turnover on average]. The US$3 billion [of rolling chip turnover in April] we believe is a one-off situation. Because frankly speaking in April, we have had a group of people [that] came, [which was] not really planned ahead. You have to understand that we have only 15 to 16 [VIP gaming] tables, 5 VIP rooms,” explained Mr Yan.

“That’s why we came to say [we were] reaching table capacity… US$1.2 billion to USD1.3 billion [of rolling chip turnover] was always our target… from the beginning for the temporary facility. This will last until the property [Grand Mariana's main casino building] opens.”

Imperial Pacific is expanding its gaming presence on Saipan with a pledged investment of US$7.1 billion through 2020. Following the opening of the permanent casino at Grand Mariana, the firm would develop the second phase of its casino resort project on the island adopting an “asset-light” model, Mr Yan said.

“The concept [for the second phase] is basically a ‘mini-city’ within Saipan that has accommodations and gaming facilities along many other facilities that will attract family play. So the concept is Sentosa-style,” said Mr Yan, referring to Resorts World Sentosa, a casino property from Genting Singapore on the Singapore holiday island of the same name.

“The thing about the second phase is that as a listed company, we don’t intend to spend a lot of capex. The things that I mentioned are all supposed to be outsourced to third-party developers…Our job is [to run] that any gaming facilities within that complex,” Mr Yan told GGRAsia.

“With an asset-light model, the capex and the funding burden is not so much on our shoulders – not like the first phase [Grand Mariana], where we are doing everything ourselves, including the funding,” he added. Imperial Pacific started the construction of its US$550-million Grand Mariana casino resort in mid-2015.

The Saipan project expansion has already attracted interest from several mainland Chinese property developers, Mr Yan told us. At a conference session at G2E Asia, the executive noted that Imperial Pacific would announce in the third quarter which developer it will take on as a strategic investor: the developer will build one to two hotels for the Saipan expansion project next year.

In a filing dated May 16, Imperial Pacific announced that a former director of the U.S. Central Intelligence Agency (CIA)_, Robert James Woolsey, has been appointed as an independent non-executive director at the firm. Last month Imperial Pacific announced it had established a three-member advisory committee  to provide its management with “sound strategic and tactical advice”. They were named as: former Governor of Pennsylvania, Edward Rendell; former Governor of New York, David Paterson; and former director of the Federal Bureau of Investigation (FBI), Louis Freeh.

“We’re in gaming, and it is a sensitive industry especially now given what’s happened in Macau – with the money laundering, with the ‘know your customer’ rules,” Mr Yan told GGRAsia. “So the company is very conscious of not having any potential problems.”

Mr Yan added: “We need oversight. So who are the best people to oversee us?… the people who oversee any gaming commissions in the U.S….  It’s the FBI, it’s the [U.S.] Treasury, it’s the CIA… And if we have these people on our board, these are serious people: the minute they join us, it’s putting stamp endorsing our operating in a legit[imate] territory in a legit[imate] way.”

Only two of Macau’s 18 satellite casinos – the Rio Casino and the President Casino – have closed amid changes to the city’s regulatory system for such properties, and against... END_OF_DOCUMENT_TOKEN_TO_BE_REPLACED