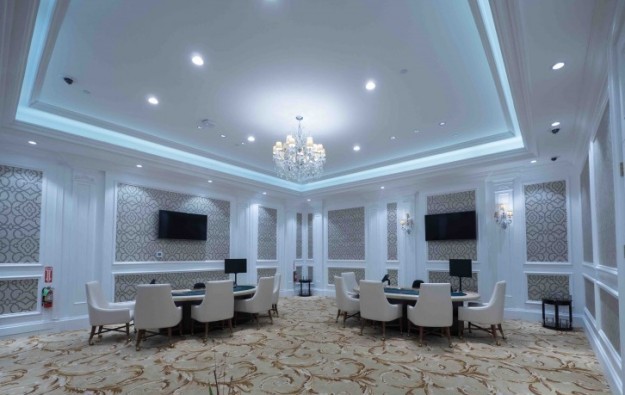 Such volume amounted to nearly US$5.59 billion, according to a Thursday filing to the Hong Kong Stock Exchange. In January 2016, VIP rolling chip volume at the Saipan venue – called Best Sunshine Live – was US$2.26 billion.

It took the Venetian Macao, a flagship property of casino operator Sands China Ltd in the Macau casino market, the whole of the fourth quarter to record US$6.89-billion in rolling chip turnover. Wynn Macau, a property developed and operated by Wynn Macau Ltd, reported table games turnover in VIP operations of US$10.80 billion for the three months to December 31.

An executive of Imperial Pacific told GGRAsia in a telephone interview – after that story was published – that it was “not possible” for the firm to facilitate any capital flight from China or elsewhere, and that it was complying with all relevant U.S. laws and regulations.

Best Sunshine is currently operating a temporary casino (pictured) – which opened in July 2015 – on Saipan, the main island of the Commonwealth of the Northern Mariana Islands (also known as CNMI), a U.S. jurisdiction.

In a January 4 filing, Imperial Pacific said it planned to launch its permanent casino “in the first quarter of 2017”.

On January 31 the Marianas Variety newspaper reported that several CNMI lawmakers had introduced a bill calling for a 5 percent tax on the Saipan casino operator’s gaming revenues – i.e., on a business performance indicator different from the rolling chip volume quoted in company filings.

Imperial Pacific had stated in an August 2014 filing that it was required to pay an annual Casino Resort Developer Licence fee of US$15 million during the term of its Saipan licence. It added the fee would be adjusted every five years to account for cumulative increases in consumer price inflation.

Spectrum Gaming Group LLC, a specialist consultancy on probity and legal compliance in the regulated casino sector, has issued its “Top Ten Trends To Watch for 2023”, including likely events in... END_OF_DOCUMENT_TOKEN_TO_BE_REPLACED