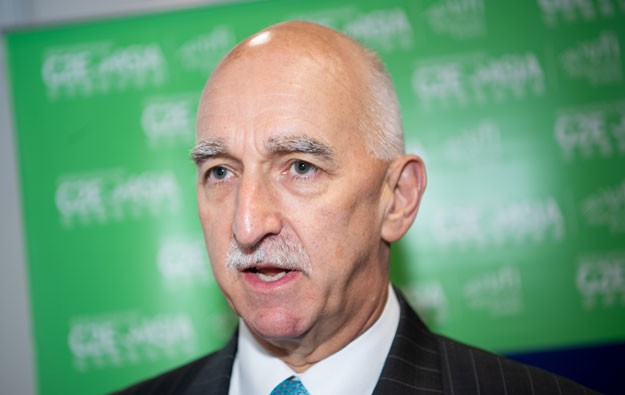 Macau casino operator MGM China Holdings Ltd has dropped the idea of having an in-house resident show at its casino resort MGM Cotai. Instead, the firm plans to continue bringing to the property international shows on a temporary basis, MGM China’s chief executive confirmed to GGRAsia.

“Our change of strategy is a reaction to consumer demands,” Mr Grant Bowie (pictured) said. “We are recognising the consumers now are looking for a lot more variety of activity within the [casino resort] complexes.”

It had been reported in October last year that “Destiny”, a resident show that had been planned for the MGM Cotai resort – a facility opened in February 2018 – would not be going ahead imminently.

That show “has been dropped,” Mr Bowie confirmed in his comments to GGRAsia. “But we have retained a lot of the assets, and more importantly, we retained all the learning that we gained from that.”

“We made that decision… to move away at this point in time from a permanent resident show, to a… variety of shows,” he said.

The MGM China executive added: “What we are more interested in is having a continuous entertainment programme.” He said the MGM Theater facility at MGM Cotai – which he described as “innovative” in its design – gave the firm the flexibility to offer a variety of productions.

As… we work how to get the best out of the theatre… it has become clear to us that the audiences want things to change more rapidly,” he stated, referring to entertainment content.

MGM China promotes MGM Theater as “Asia’s first dynamic theatre”. The venue seats up to 2,000 people in more than 10 configurations.

MGM Cotai is scheduled to welcome “Fuerza Bruta” – described as a “postmodern” theatre show, one that comes from Argentina – from June 14 to August 4. During March, the property hosted U.S. hip-hop dance crew Jabbawockeez. From April 13 to May 4, MGM Cotai staged the Macau leg of a Harry Potter Film Concert Series.

The Macau market has been plagued by more misses then hits when it comes to in-house resident shows and other non-gaming offerings by casino operators.

The longest running resident show in Macau has been Melco Resorts and Entertainment Ltd’s “The House of Dancing Water”, at the firm’s City of Dreams property on Cotai. The show, created by Italian-Belgian director Franco Dragone, had its premiere in September 2010 and it is still on.

A number of other productions staged for extended periods has seen a dwindling in the audience. The list includes “Zaia”, a stage production from Canadian entertainment company Cirque du Soleil, and considered the first Las Vegas-style resident show in Macau. The production based at Sands China Ltd’s Venetian Macao ran from August 2008 to February 2012.

The latest high-profile resident show to have exited the Macau casino market was the “Monkey King – China Show”, a spectacle based on the Chinese classic narrative “Journey to the West”. The Beijing-based Huayan Group Ltd staged the show from February 2017 until January this year, at Sands Cotai Central casino resort, a venue operated by Sands China.

Melco Resorts has also confirmed its “Elēkrŏn” stage production, launched at Macau casino resort Studio City in January, will come to an end on July 21.

In his comments to GGRAsia, Mr Bowie confirmed MGM China was planning to add 65 additional guest suites to MGM Cotai.

The new accommodation is to become available “probably 12 to 15 months from now because we are still going through the planning and then obviously the build-out phase,” he added.

Mr Bowie said the investment for the new suites had “not yet been determined”.

Jim Murren, chairman and chief executive of MGM Resorts International – the parent firm of MGM China – had stated in April that since the opening of some new high-end accommodation at MGM Cotai known as Mansion villas in the first quarter, the firm was recording “some really positive signs and re-emergence of customers that we had not have in the property.”

In early April, Australian investment bank Macquarie Capital Ltd said that the modest size of a standard hotel room at MGM Cotai relative to market rivals could remain a drag on the efforts of management to ramp up casino business among premium customers at the property. A Macau junket investment group had told GGRAsia – prior to the announcement of Mansion villas opening at MGM Cotai – that the VIP brand had feedback from clients saying they preferred larger rooms than had been on offer at MGM Cotai.

Mr Bowie also discussed the delay in the opening of new-style smoking lounges at MGM Cotai, as compared to other major Macau casino venues. The property only got regulatory approval for such lounges on April 30.

“Frankly, when we opened our property [in February 2018], we had many of the lounges pre-approved,” Mr Bowie told GGRAsia. “But subsequent changes that were added [by the Macau government] to the programme to enhance the performance of those lounges, meant that we had to go back and modify those lounges,” he added.

Many of MGM Cotai’s market competitors had been given the nod for such facilities since the end of March or earlier. The rules on new-style smoking lounges became effective on January 1.

The ability of local gaming operators to offer casino players on-site smoking facilities via lounges close to casino floors – albeit that tableside smoking is now banned in the Macau market – had been identified by a number of investment analysts as a likely positive for gross gaming revenue. Being able to offer smoking lounges was seen as a way of reducing the risk of players leaving the premises to smoke and not coming back.

Mr Bowie acknowledged that it was an “added opportunity” for MGM Cotai to be able to offer smoking lounges to gamblers. Until April 30, players at that venue had to go outdoors to smoke.

“As you get into the summer, [having smoking lounges] is probably more relevant,” he said, in reference to Macau’s hot and humid summer weather.

The executive however said he thought MGM Cotai had not lost significant business during the time it was unable to offer new-style smoking lounges.

“Frankly, the smoking process has been taking so long, that I actually think many of our customers have adapted to this changed environment,” he said. “We did not actually see any specific effect from that.”

Singapore has the potential to be a “top choice” for Chinese outbound travellers, once the country reopens and eases travel restrictions associated with the Covid-19 pandemic, suggested... END_OF_DOCUMENT_TOKEN_TO_BE_REPLACED