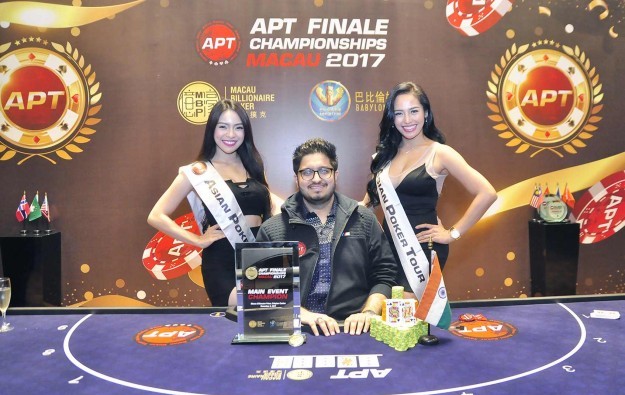 India’s Varun Gupta (pictured centre) was the winner of the main event of the APT Finale Macau Championships 2017 presented by the Asian Poker Tour (APT). The player took home HKD300,400 (US$38,449), according to a Thursday press release from the tournament organisers.

The five-day main event featured a total of 157 entries, with a HKD11,000 buy-in, the release added. The poker tournament is taking place at the Macau Billionaire Poker room at Babylon Casino at Macau Fisherman’s Wharf. The event began on November 29 and runs until December 10, with some side events.

Taiwan’s Jack Wu En-ching ranked second, getting a cash prize of HKD310,000, followed by Lim Shyh Chyn from Malaysia, who took home a prize of HKD156,000.

The next tournament of the Asian Poker Tour will take place between January 19 and 28, in Ho Chi Minh City, Vietnam. APT tournaments will return to Macau in April next year. The APT Macau Championships 2018 will be held from April 25 to May 6 at the Macau Billionaire Poker room, subject to approval by the local gaming regulator.

The APT announced in July that it had signed an exclusive agreement with the Macau Billionaire Poker brand and the Babylon Casino to bring a minimum of two international poker events per year to Macau for the next five years. The APT Macau Championships 2018 is the second of the two events.

Philippine gaming investor Leisure and Resorts World Corp reported a net loss of nearly PHP222.4 million (US$4.2 million) in the first three months of 2022, up from PHP125.6 million a year earlier.... END_OF_DOCUMENT_TOKEN_TO_BE_REPLACED