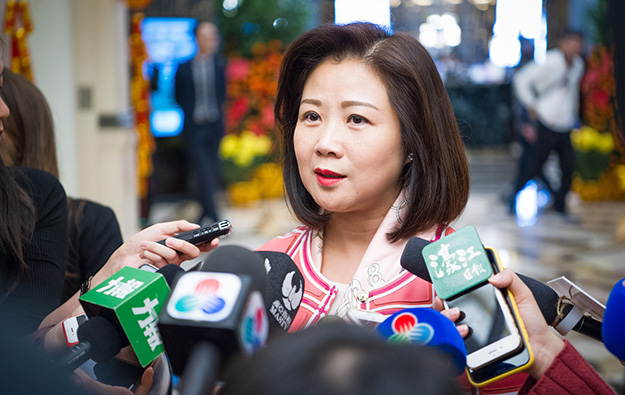 A member of the family that founded casino-services and hotel-operations firm Macau Legend Development Ltd says the group will disclose “this year” details of Legendale Hotel, a planned new venue for its Macau Fisherman’s Wharf site on the waterfront of the city’s peninsula.

Melinda Chan Mei Yi (pictured in a file photo), an executive director of the firm, said so on Sunday in comments to local media, on the sidelines of a public event in the city.

“We have planned to let the public know our scheme within this year,” she added.

Levo Chan Weng Lin, boss of Macau casino junket brand Tak Chun, was confirmed in December as the new chief executive of Macau Legend, taking over from Ms Chan, who is not related to him. Under the new arrangement, Mr Chow became a non-executive director.

In late November Macau Legend said in a Hong Kong filing that interests controlled by the Tak Chun boss had upped their investment in Macau Legend to 33.19 percent.

The rejigged board featuring the Tak Chun boss could help Macau Legend “become stronger”, Ms Chan was quoted by local Chinese-language media outlet All About Macau as saying in her latest remarks.

Ms Chan remains as the president of Macau Fisherman’s Wharf International Investment Ltd, the local operating entity of the complex.

A plan for a new hotel at Fisherman’s Wharf has been on the cards for a number of years. In a June 2013 filing to the Hong Kong bourse, Macau Legend said it hoped to start building the Legendale Hotel in the first quarter of 2014. Macau Legend has not clarified whether it would seek to have a casino at Legendale Hotel once it is built.

Several commentators on Macau gaming law have mentioned that the topic of satellite casino businesses licensed by Macau concessionaires but within third-party-owned hotels, might be an area looked at when Macau amends its gaming law ahead of the expiry, in June 2022, of the existing six licences, and the anticipated new public tender for Macau gaming.

In June, Ms Chan said Macau Legend was rejigging the design for the Legendale Hotel, which is due to sit in front of Sands Macao, Sands China Ltd’s first Macau gaming venue. Macau Legend had initially proposed the Legendale Hotel should be 90 metres (295 feet) high, which stirred public discussion on the scheme’s suitability for that waterside area.

China has moved one step closer towards reopening, by relaxing some its Covid-19 control measures, with most infected people now able to quarantine at home rather than in state-sanctioned... END_OF_DOCUMENT_TOKEN_TO_BE_REPLACED